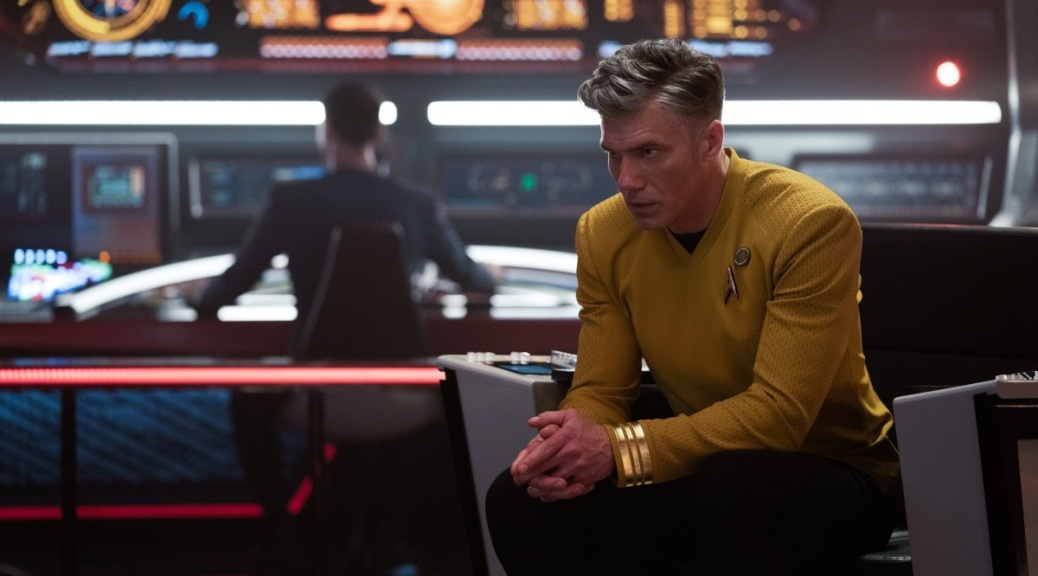 There are very few villains that send a chill up my spine. “Star Trek” as a franchise has had three. Those original flavor Borg with their singular objective and minimalist score still thrill me every time I scroll past a rerun of “The Best of Both Worlds”. They may represent the hallmark moment of franchise villainy precisely because they can’t be circumvented through diplomacy or logic. Their single-minded objective is a straight line from “we need to assimilate you” to “you’re assimilated”. There’s no wiggle room for negotiation within that.

Of course, later iterations of the Borg would reveal hive structures, hierarchies, a queen – elements that may make them more interesting, but that also open them up to the power of negotiation and compromise. We all know if a Starfleet crew can negotiate with someone, they don’t have to beat them or survive them any longer, they just need to solve the mystery of getting to the same table together.

This was one of the most exciting ideas that premised “Star Trek: Discovery”. The Klingons recognized the negotiation table was inevitable, that Federation diplomacy was too influential to overcome, and the only way to stave it off was a state of ever-present war. But the Klingons aren’t really terrifying when their most famous character is the big, cuddly grumpikins that is Worf.

The second terrifying villain in “Star Trek” came from “Voyager”. This came in the form of the Vidiians, whose species were dying to a disease known as the Phage. The Vidiians themselves were tremendously empathetic, but what the Phage forced them to do meant that there was once again no room for a diplomatic or logical solution. The Vidiians use other species to replenish the degraded organs of their own, hunting living transplant candidates. Simply put, you can’t negotiate with a disease, and their single-minded desperation was something anyone could be driven to. This also gave us the greatest of the Janeway monologues:

Perhaps “Deep Space Nine” should count – not for the Dominion but for the more realistic, religiously manipulative, systemic villainy of Kai Winn and the casual, self-justifying embodiment of genocide in Gul Dukat. But DS9 dealt more in grasping its large concepts, in looking at what should be terrifying and understanding the banality of it, and in so doing knowing better how to recognize and resist it. Where the other shows in the franchise offer hope, DS9 engages the practical work that builds it (except for O’Brien, who is forever destined to get screwed). Where various iterations of the Enterprise would tell the alien of the week, “This is where the real work for your people begins” before flying off to the next adventure, DS9 just tucked into the work. It couldn’t really fly anywhere. There’s a place for both, but there’s a reason DS9 is heads above the other shows for me.

And there are villains who are just fun. Jeffrey Combs is 32 flavors and then some of Weyoun, Romulans drag the party down with that Cold War energy but have by far the coolest ships, Q borders right on that line between fun and annoying, and Ricardo Montalban’s Khan – perhaps the greatest Star Trek villain of all – is so successful a foil to Captain Kirk that he actually grounds William Shatner’s acting for a whole movie.

There are also one-off horror episodes, something “The Next Generation” was particularly good at with “Night Terrors”, “Schisms”, and “Identity Crisis”, but occasionally missed on with “Conspiracy” or the fun but ludicrous “Genesis”. Yet these didn’t offer villains who promised to return so much as mysteries that could be solved then and there. Certainly, there was no one who made a promise to return an undeniable threat that you couldn’t begin solving.

Enter “Star Trek: Strange New Worlds”. The series is wildly successful out of the gate, drawing from all eras of Star Trek and firmly planting its stake as one of the best series of the year. It retains the quickfire, in-the-moment nature of “Star Trek: Discovery” while framing standalone episodes along the lines of “The Next Generation” or “Voyager”. It returns the franchise’s sense of weekly moral quandaries with stellar casting that includes Anson Mount, Rebecca Romijn, Ethan Peck, Christina Chong, and Melissa Navia, just to name a few.

“Star Trek: Strange New Worlds” delivers the most chilling moment in the franchise since “The Best of Both Worlds” and that chilling Borg synth score. It comes from the most unlikely place, a species long known for its rubber suit and slow, memeable fighting in “The Original Series”. I hope you’re ready to log-in to YouTube so they can make sure you’re old enough to watch this mature, violent content:

But “Strange New Worlds” takes that single 60s villain (and its brief CGI entry in mirror-universe “Enterprise”) and turns the Gorn into a force of nature, an unseen pack hunter seeking live prey to transport to the planets where they raise their young, like a cat bringing a mouse back to its kittens so they can train for killing. “Memento Mori” immediately becomes the most thrillingly frightening Star Trek entry in nearly three decades, and it returns me to that place where I was a 90s kid enraptured by what I saw on screen.

Sure, the episode’s a ‘submarine’ episode, a franchise staple of ships hiding from each other in space since “Balance of Terror” in 1966. It doesn’t just emulate, though, it translates the concept into the remarkable pace and energy of “Strange New Worlds”. In a franchise that enjoys characters sitting down to problem solve, the Gorn’s single-minded relentlessness – much like the Borg’s – is what makes them most terrifying. You can’t problem-solve relentlessness, you just have to hope you can mitigate the damage of each new corner you’re pressed into as you try to outlast it.

In its first three episodes, the series has already shown us it can pull off first contact, space mystery, and medical emergency plotlines. Now it’s shown us it can land a space action/horror episode with cinematic elegance. Next we get a comedy episode.

Look, this article’s an excuse to geek out about Star Trek memories, sure – but really it’s a way of highlighting just how impressive “Strange New Worlds” is. I could go on and on, and might in the future. There’s so much to talk about in Captain Pike’s soft-spoken, inclusive, patient, and trusting style of leadership, an expression of healthy masculinity realized by Anson Mount that’s still rarely seen in film or TV. It speaks volumes in a franchise where Kirk would bite, Picard would go full rulebook, Saru’s still learning, and Archer would ask for suggestions as an excuse to dump his passive-aggression on whoever he could corner.

(Sisko and Janeway are cool, though. How best captain boils down to Picard and Kirk instead is beyond me. Maybe if you Tuvixed them into Pikirk or Kircard. That fanfic’s gotta be out there.)

Right, the point is that “Strange New Worlds” is a phenomenal show, and it’s the strongest, most polished “Star Trek” straight out of the gate. I say this as someone who loves the new and old shows. For instance, “Discovery” gets a lot of flak, but it takes some of the silliest legacy concepts in Star Trek and creates captivating, meaningful story arcs around two of the best leads the franchise has ever had (Sonequa Martin-Green’s Burnham and Doug Jones’s Saru). And of course, “Strange New Worlds” got a bit of a try-out across season 2 of “Discovery” itself.

“Strange New Worlds” builds on the divergent modern trio of “Discovery”, “Lower Decks” (more than you’d think), and “Picard” in some very smart ways, but it also takes big parts from what made the more strictly shaped 90s trio so successful. It reinterprets retro design and ideas from “TOS” and “Enterprise”, and mixes and matches special effects elements with CGI in a way that hasn’t been realized quite this thoroughly in the franchise before.

Four episodes in, and “Strange New Worlds” has announced that it’s eager to try anything and everything Star Trek, with the talent and development in place to succeed on every count. That it’s delivered terror in a way we haven’t had since original flavor Borg is just one way of saying it’s delivering Star Trek in a way we haven’t seen since the 90s – thankfully not the exact same way, and certainly with 30 years more social progress. In terms of result, it feels like the bridge between the 90s and today, episodically self-contained but with a faster, modern cinematic approach replacing the stagy elements of the 60s/90s/00s era. (If you forced me to choose the most similar entry, I’d go straight to the last of the 90s shows and the previous best bridge of the eras, “Voyager”.)

“Strange New Worlds” easily stands on its own, but if you like “Star Trek”, you’ll recognize a mountain of elements and influences drawn from across the franchise’s history. What’s more impressive is what you won’t recognize until you think about it later. “Strange New Worlds” does an incredible job of absorbing and learning from what’s come before in a way that feels seamless and incredibly natural as you’re watching.

You can watch “Star Trek: Strange New Worlds” on Paramount+.