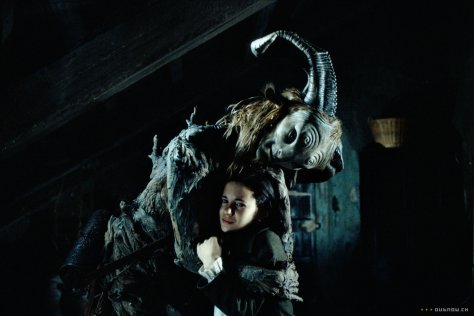 Yesterday, a friend of mine commented that she disliked my describing Rose Byrne as a “genre darling” in my Neighbors review because it confines her within a narrow field of film and the word ‘genre’ is generally derogatory. I can absolutely see where she’s coming from, but I’d like to explain why I used the description and why ‘genre’ is not a naughty word.

There’s a difference between a judgment and a descriptor. My reviews go to paper, too, so they don’t get to be as free-form as some of my other articles – I’m limited to about 700 words. Sometimes, I have to describe personalities very quickly. Rose Byrne is most often associated with ‘genre’ films; that’s how the most readers will know who I’m talking about in the fewest words. In my judgment, I hardly think Seth Rogen ought to be a “comedy mainstay,” as I described him in the review, but that’s how readers know him because that’s how he’s used. Any time I can effectively describe an actor in two words rather than list off movies, it frees up an incredible amount of space I can use to talk about the film itself. And Neighbors has an issue that demanded the space: one of the least responsible inclusions of rape I’ve ever seen on film.

My goal was to concisely describe Rogen and Byrne and Zac Efron so that an audience would immediately recognize who I was talking about. Maybe I succeeded and maybe I didn’t, but when we call Rose Byrne a ‘genre darling’ or William H. Macy and Tilda Swinton ‘indie darlings’ or John McCain and Barack Obama ‘media darlings,’ it doesn’t define them as being capable of nothing else but those specialties. It defines them as being so particularly excellent at those specialties that they stand head and shoulders above incredibly crowded fields. It is not mutually exclusive to being good at anything else and it is not meant to cage them within a particular genre.

When I say Byrne carries Rogen and the comedy, that’s a judgment. When I say she shouldn’t have played a scene in which she gets a girl drunk so she can peer pressure her into sex and physically force her into sexual contact, that’s a judgment. But saying Byrne has a history in ‘genre’ film is no different than describing Efron as a “former Disney wonderkid.” They aren’t meant to be complete definitions, but rather to get a reader on the same page as quickly as possible.

Insofar as ‘genre’ goes as a derogatory term, I grew up watching and reading almost nothing but genre. I love genre. To me, ‘genre’ is a far more appealing word than ‘drama’ or ‘literary’. Genre can do things neither of those can. Robert Heinlein is genre. Ursula K. Le Guin is genre. Gabriel Garcia Marquez and William Gibson and Margaret Atwood are genre. The Thing and Star Trek and Gravity are genre. In 1992, Star Trek: The Next Generation had consecutive episodes that argued for gay marriage rights and for the humane qualities of euthanasia. Show me one other U.S. TV show that’s willing to risk that much every week even today, let alone 22 years ago under 12 straight years of Reagan/Bush.

Samurai films and monster movies are genre. They’re how Japan chose to confront, on a nationwide scale, the guilt and shame of blindly following leaders into decades of genocide and war. Superhero movies are genre. They’re fast becoming our best venue for culture-wide dissections of privacy and military-industrial concerns in our own government. Martial arts films are genre. They’re what allowed China to stake their claim to cultural relevancy alongside Hollywood: first among their own people and, later, to the West itself. Westerns opened up Spain’s film industry the way horror movies opened up Italy’s. Magical realism brought Latin American writers to the fore. Mexican horror (through the Spanish film industry Westerns created) has become the premier translation for Mexican Catholicism’s uniquely evolved fusion of modern doctrinal religion, old-fashioned spiritual animism, and ancestor worship.

‘Genre’ can help heal countries, can call out governments, can help introduce cultures to each other, can kickstart national film industries, can translate the incredible complexities of entire religions and cultures. ‘Literary’ and ‘drama’ don’t often get to be so outspoken. In my opinion, they far too often play it safe.

So screw ‘genre’ being a derogatory term. I don’t get on board with that. ‘Genre’ is what people want to go see. ‘Genre’ is what takes risks before more accepted forms do. ‘Genre’ changes minds and elicits ideas and time and again has to make smarter, sharper arguments than more ordinary forms. So if I bother to call something ‘genre,’ what I’m really saying is, “This shit’s brave.” And if I bother to call an actor a ‘genre darling,’ what I’m really saying is, “This actor takes risks and, because of that, they do things 99% of their contemporaries can’t.”

Samuel Beckett, Bertolt Brecht, Fritz Lang, Mary Shelley, Ray Bradbury, Georgie O’Keefe, Frida Kahlo, Alfred Hitchcock, Stanley Kubrick, Francis Ford Coppola, Whitman, Allen Ginsberg, Mary Cassatt and Edgar Degas and all of Impressionism were ‘genre’ before they became so overpowering and immediate as artists and movements that they became accepted as somehow ‘dramatic’ or ‘literary’ and therefore ‘classic,’ suddenly off-limits to ‘genre.’ But the truth is none of them ever left being genre. ‘Accepted’ just caught the hell up.

‘Genre’ drags everything else forward. Everything. I will never use that word in a derogatory way, but I will absolutely keep using that word, because ‘genre’ is what I was raised on and I can’t think of any piece of art I like more than a science-fiction movie like Moon or a horror movie like Let the Right One In, a Western like Once Upon a Time in the West or a martial arts film like Police Story, a crime movie like Stray Dog or a mystery like North by Northwest. Not calling something ‘genre,’ that’s derogatory. But ‘genre’ is the future. It always was and it always will be, and there’s absolutely nothing ‘literary’ or ‘dramatic’ can ever do about it. They’ll continually play catch up to ‘genre’ for the remainder of human existence. And if that’s not a ‘genre’ ending, I don’t know what is. 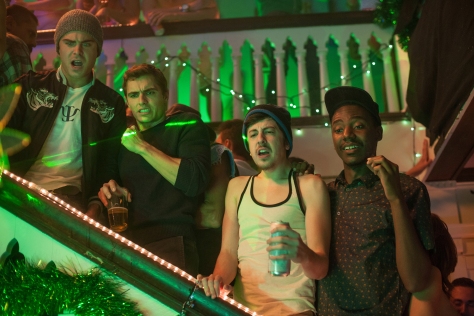 Neighbors is rated R for pervasive language, strong crude and sexual content, graphic nudity, and drug use throughout. Let’s start with the language. When I can watch prime-time detective shows in which heads explode but not a single cuss word is spoken, and they’re rated for families, I’ve come to the conclusion that our rating system might be prioritizing some of the wrong things. Neighbors can get away with its language because of its actors – comedy mainstay Seth Rogen, genre darling Rose Byrne, and former Disney wonderkid Zac Efron.

Efron runs a college fraternity that moves in next to a married couple (Rogen and Byrne) with a baby. Things quickly get out of hand as the two sides engage in a violent prank war that has no practical purpose except for giving us an excuse for a movie. Rogen is no Chevy Chase, however, who made these sorts of competing neighbor plots his bread-and-butter in the 80s.

The dialogue feels largely improvised, so it’s a surprise that the majority of the humor actually comes from Byrne, who’s typically much more at home in sci-fi and horror movies, as well as Efron, whose High School Musical days are long past. The problem with Rogen is that we’ve seen his act before, and it hasn’t evolved in any way since Knocked Up and Pineapple Express. If anything, it’s lost energy.

Now for the sexual content and graphic nudity. There’s a lot of it. Most of the jokes are obsessively sexual. That’s not a bad thing in the right hands, but Neighbors never figures out a reason it’s making these jokes beyond the fact it has Seth Rogen in it and they’re expected. A few of the bits work on the strength of some well-placed cameos, but some sequences – Rogen milking Byrne after he breaks her breast pump, or the two rushing to the hospital because their baby gums a prophylaxis left on their lawn – are so monumentally stupid I felt embarrassed for the actors.

You’ll notice I’m using their real names – the characters had names, but I’m not sure they’re ever mentioned after the 10-minute mark. More than any other movie I’ve seen recently, I kept thinking of them by the actors’ names – given how unlikeable the characters are, this isn’t necessarily a bad thing.

You see, Rogen and Byrne play tired parents. The first chance they get, they rocket off to the frat house so Rogen can get drunk and do mushrooms. See, he’s tired from working a job he cuts out on every afternoon to smoke pot. Selling his character as a non-functioning substance abuser and a real, caring family man just doesn’t work. But he’s not alone – Byrne tries to break up the frat by making Efron’s girlfriend sleep with his best friend. How does she do this? By getting the girlfriend drunk, even pouring liquor down her throat after the girl protests and tries to stop drinking. Then Byrne pressures her into having sex with the best friend.

I get that we’re not really supposed to take this stuff seriously. Seth Rogen’s using a dance-off to distract the rest of the house party while this is going on, after all, but there are a dozen other ways to achieve that plot point that don’t involve rape. The film never even stops to think this is rape; the girlfriend is just a plot point to break up the frat. If a comedy doesn’t consider pouring liquor down a woman’s throat to have sex with her even as she tells you to stop as forced and violative, that’s a silent endorsement to a lot of viewers on the parts of the writer, director, the popular Rogen, Disney-kid Efron, and wholesome Rose Byrne.

I was very ready to meet Neighbors halfway. Truth is, most of it is a decently successful comedy whose actors pull off some pretty bad jokes much better than they should. Unfortunately, that also means they end up pulling off hard drug use and rape, presenting both as free of consequence and without even recognizing that’s what they’ve done. Like I said at the beginning, though, there’s one thing I don’t have a problem with – the language. That’s a good thing, since I use some choice words to describe Neighbors outside of print. 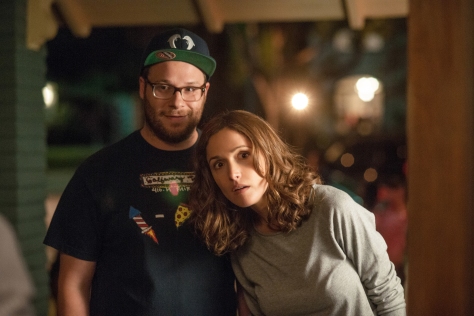