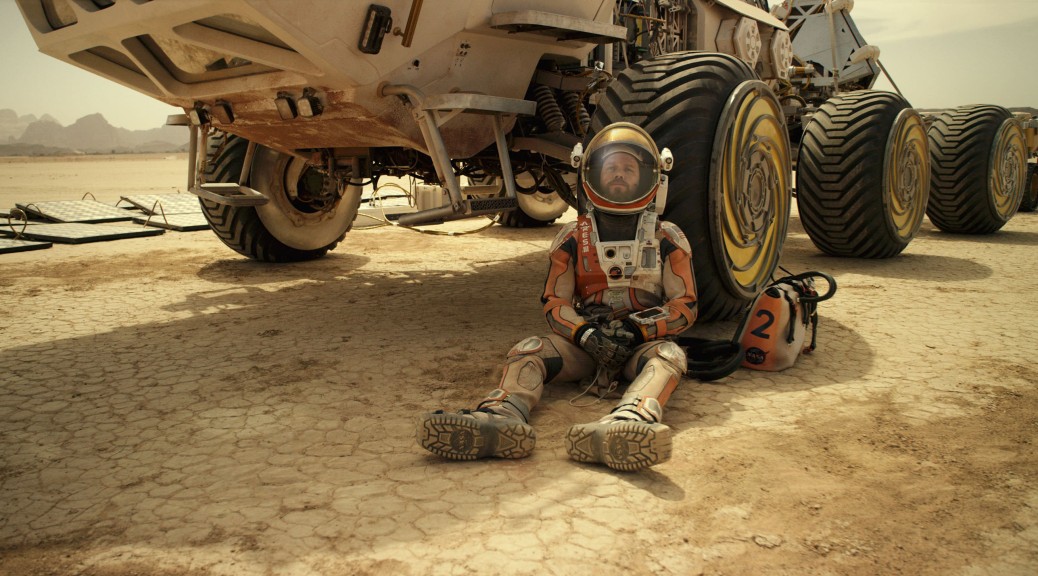 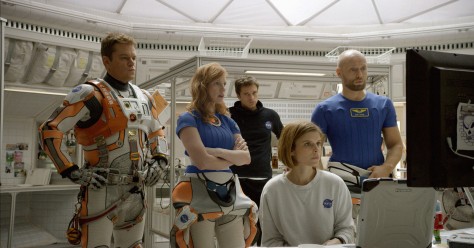 An astronaut in the third manned mission to Mars becomes stranded during a storm. Believing him dead, his crew aborts their mission, abandons the planet, and launches back toward Earth. A botanist by trade and trapped in a harsh climate, the stranded Mark Watney (Matt Damon) has to figure out how to collect water, grow plants in unfriendly soil, and survive the harsh temperatures of Mars.

All the while, NASA must figure out how to help him, communicate, and (perhaps most interestingly) navigate the needs of a rescue mission through a politically aggressive media.

At the center of the story, Damon balances desperation with a sort of positive, confident, self-deprecating attitude, as if playing Chris Pratt with a dramatic range. It’s a superb display of trying to remain mentally healthy and positive in what would otherwise be a depressing and hopeless survival situation. Even if the focus of the film isn’t on big moments of acting, Damon textures the role with a great deal of nuance. The film doesn’t use elongated, weepy moments as a crutch. Watney loses his cool, enjoys success and failure, and struggles to remain stable at points, but this isn’t “Cast Away.” Damon is excellent, but his emotional state isn’t the focus here; his actions are. In this way, he carries the film’s momentum on his shoulders.

Damon is something special in the film, but he’s not the only one. As his mission commander Melissa Lewis, Jessica Chastain (“Interstellar”) continues conveying entire character histories with just a glance. Her ability to be an emotionally open book and a consummate professional all at once is recognizable to audiences because most of us struggle with that balance in our daily lives. Even if Lewis gets a fraction of the screen time Watney does, everything about her is humanity at its best and most responsible. Few actors could command so much loyalty in the space of a handful of scenes.

On the ground, NASA is in the hands of administrators played by Sean Bean, Jeff Daniels, Chiwetel Ejiofor, and Kristen Wiig. Decisions range from assembling another supply mission to keep Watney fed, to whether to tell the crew who left him that he remains alive. Surprisingly, these decisions hold as much intensity as Watney’s unique struggle. Balancing the practical with the political on Earth becomes as life-or-death for Watney as things like food and water.

There’s an incredible translation of science happening in the film. Watney relies on his scientific know-how, on knowledge of botany, chemistry, electronics, and astrophysics that are masterfully translated for the audience. Complex ideas are skillfully communicated in simple, practical ways.

This plays into one of the most remarkable things about “The Martian.” It is by far the least “Ridley Scott” of director Ridley Scott’s movies. After a string of films that’s gone from “Prometheus” to “The Counselor” to “Exodus: Gods and Kings,” each one more trapped inside of its own style than the last, it’s refreshing to know Scott can still just tell a story. “The Martian” isn’t subject to strange visual experiments or odd editing. If anything, its visual storytelling errs on the side of safe. That works for a film like this. The story is so compelling, the actors so commanding, too much extra style might have ultimately become too distracting. Scott instead relies on techniques he’s often avoided in his career: rapid jump-cut editing, voice-over, point-of-view shots, fast-motion, and a relatively still camera.

The easiest comparison in subject matter would be the most recent stranded-in-space film, “Gravity.” These are two very different movies, however. “Gravity” envelops viewers in a visceral experience reminiscent of horror movies. “The Martian” offers a very different kind of intensity. It evokes something less existential and more practical. If anything, “The Martian” takes on a very matter-of-fact tone that resembles one of the most realistic portrayals of space disaster, “Apollo 13.”

One extra note: Ridley Scott has become one of the premier directors of 3D. As many other problems as “Prometheus” and “Exodus” had, their 3D was downright sumptuous. “The Martian” is no different, and its otherworldly setting offers up a lot of opportunities both before and beyond the screen. Flying dust, bits of debris, and a looming spaceship all feature. So do vast Martian canyons and valleys, calling upon the haunting beauty and loneliness of being stranded in a strange wilderness. His 3D is exceptionally detailed and makes tremendous use of the foreground. Nausea’s not a problem because there’s not a ton of fast movement, but if you get headaches, that’s from the foreground detail. In this case, sit a little further back in the theater, so that you’re at least the height of the middle of the screen. Of course, the film will play exceptionally in 2D as well without losing its beauty.

There’s language, brief rear nudity, and a scene of injury, but it’s very safe for children and I’d highly encourage it as a family film that can help spur discussions about science and space.

1. Does “The Martian” have more than one woman in it?

In space, women seem to be in charge, and I detailed just how well Jessica Chastain delivers her role as the mission commander. It’s also worth noting that – after Chastain’s Lewis – Kate Mara’s Johanssen seems to have the most agency within the crew.

On the ground, it’s a different story. Jeff Daniels, Chiwetel Ejiofor, and Sean Bean exert more power and enjoy more agency in their characters than Kristen Wiig and Mackenzie Davis do. Wiig and Davis play characters whose jobs involve being answerable to these men (well, at least to Daniels and Ejiofor).

It’s therefore a mixed bag, and because the focus of half the story is on Watney alone, it makes the film difficult to judge along these lines. In other words, it features three storylines, in order of screen time given to them: 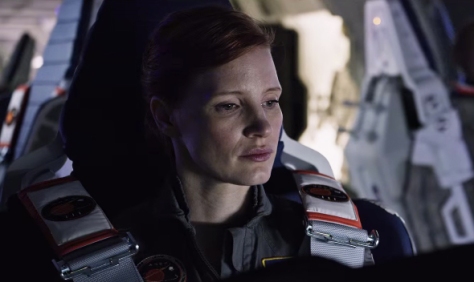 The only other thing I’ll note is that I appreciate how much Chastain’s performance gives us someone who can lead without being emotionally closed off. The unfortunate perception among many is that women cannot share emotion in the way a man can and still be trusted to lead; a woman leader has to be cold in order for many to think she’s qualified. It’s bullshit, of course, but it’s also a perception that many women have to at least acknowledge and be aware of when taking on leadership positions in the U.S. I appreciate that Chastain threw that on its head. She delivers an engaging, inspiring, emotionally forthright leader who commands not through coldness and aloofness, but through collaboration, communication, and a refined and experienced sense of moral, logical, and emotional judgment.

On another note, I have read some accusations of race-bending many of the roles. I have not read the book, so I cannot speak to this. “The Martian” does feature people of color more than most films, but that’s not necessarily saying much. For NASA especially, it does seem heavy on white characters. I don’t know how accurately this lines up with its source material.

Yes, we do get Chiwetel Ejiofor, Donald Glover, and Michael Pena in very positive roles and positions of responsibility, but that’s still merely 3 of the top 12 actors billed.

Where did we get our awesome images? The feature image comes from Collider’s review. The top and bottom images (both with Jessica Chastain) come from Collider’s interview with Chastain.