No one knows if the Russian mob will ever recover from this last month. First Denzel, now Keanu: their habit for angering our best action stars has cost them dearly. Never before have I seen so many secret gun cabinets, gangsters shot in totally legitimate business establishments, and henchmen hit by cars drifting sideways.

In October alone, the Russian mafia has been chased out of New York City twice now, first in The Equalizer and now in John Wick. At least it’s spurred business – the aluminum bat and tire iron industries are booming, while body shops are seeing record business from the number of SUVs driven into walls or off four-story drops. Rent on storage space has skyrocketed since so many empty warehouses and shipping yards have succumbed to awesome, slow-motion explosions.

Keanu Reeves has always been the sort of action hero who can heartlessly shoot a man in the face and turn around to save a kitten in a tree without breaking our suspension of disbelief. John Wick doesn’t take things that far – instead, Keanu’s titular Wick is briefly partnered with a charming puppy, the last gift from his late wife. When the Russian mob boss’s son breaks into Wick’s house to steal his vintage car, the puppy gets in the way and…well, now Wick is out for revenge. Turns out Wick was once a top assassin, and that’s unfortunate for the Russians. 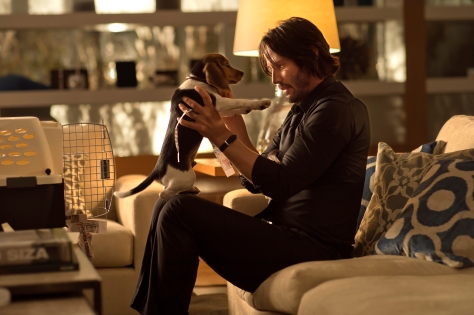 It sounds schmaltzy because it is, but Keanu plays it honestly. You can connect to his anger because he feels as if the universe has unjustly taken away what he loved most, and haven’t we all been in that place, willing to lash out at any target that presents itself?

John Wick itself is part of a 90s breed of movie I think of as gothic action, not as much for its gothic style (although this was popular) as its fatalistic worldview. These movies rely on their central actors and prioritize style over everything else. To them, the city at night is the ultimate human achievement, filled with unfeeling architecture, enough bright neon to make aging protagonists feel behind the times, and so much murder and mood that their own bloody story is just one of many. The over-the-top The Boondock Saints, a glammed out The Crow, or Keanu’s own heated, hazy debut to many Americans, Point Break, all fall into this category. These films have too short an attention span and are too aware of themselves to be noir – even the subtitles in John Wick announce themselves with colorful highlights and spill across the screen at odd angles.

Wick is exactly what you expect from the genre: simple premise, solid enough acting, and a heaping dose of cynical self-loathing. You came for the action, though, and the fight choreography is brilliant, taking advantage of Keanu’s matter-of-fact grace to create fights that are by turn balletic and brutal. The standout sequence involves Wick fighting his way through various floors of a Russian dance club. Each floor has its own mood lighting, music, and obstacles: a red-hued floor playing pop; a blue toned floor with private pools, serene new age music, and lots of glass to break; and finally a strobing dancefloor filled with unwitting civilians and dubstep. Wick fights his way through every lighting set-up and musical background as if he’s progressing through a video game (and assassins even exchange tokens for access), so you just sit back and enjoy the ride.

I’m tempted to say actors like Willem Dafoe and Adrianne Palicki are brilliant as rival assassins, but they really aren’t. They’re good, sure, but it’s more that they’re excellent stylistic fits. They understand how to strut into a fight scene and chew the scenery. Palicki, in particular, enjoys the film’s best one-on-one fight versus Keanu.

The main weakness in Wick is that it doesn’t go far enough. You keep expecting it to throw in the kitchen sink, and it teases you with characters who nearly break the movie when they begin to bait each other just for the sake of upping the ante. Just as it’s doing this, however, Wick pulls back and gives you exactly the clichéd climax you’d expect. That’s fine, but for a while, I really believed Wick was about to be far madder than what results.

The action scenes are great, the black comedy is superb, and the style reminds you that action movies once took place in dark cities during nights teeming with possibility, instead of in superspy offices and sleek corporate headquarters. John Wick and Keanu himself are refreshingly vintage. It’s rated R for violence and language, but more specifically because 99% of the movie’s population gets shot in the face at some point.

1. Does John Wick have more than one woman in it?

Ultimately, you’ve got to hold John Wick accountable for not prioritizing its women as much as its men. Palicki is a good step in the right direction: her malevolent Perkins is treated as the biggest single threat to Wick and when they inevitably fight, they go punch for punch. It is a brutal fight scene, but so are all the others. In a movie about fight scenes, I’m glad they feature her as Wick’s equal and let her beat Keanu up a bit, rather than finding a cop-out (as many movies do) to have a dangerous woman whose only threat is her cinematic sexiness. To Perkins, feminine wiles are slower than shooting a guy in the face. Palicki is good looking, sure, but so is Keanu, and the lithe silhouette he strikes is for more obsessed over than hers.

The movie doesn’t objectify women in any real way and although Wick’s angry about the loss of his wife, he’s really getting vengeance for his super-adorable puppy. I can get behind that. The movie momentarily wants to say something about cycles of violence, but it quickly backs off this in order for more guys to – you’ll never guess – get shot in the face.

Films as stylistic as these only make their worlds seem more fully realized when they cast women in equal proportion to men. John Wick misses an easy opportunity to give viewers more room to breathe inside its cinematic world.