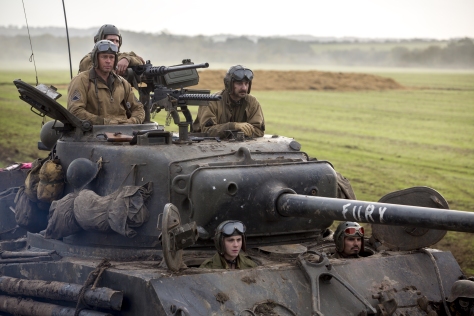 There is a review for Fury in my head that I will never write. I’ll try to tell you why:

Fury follows a tank crew pushing into Nazi Germany late in World War 2, but this is merely what happens. It’s not what Fury is about. I could call Fury the best war movie since Clint Eastwood made his Flags of Our Fathers and Letters From Iwo Jima double feature. I wouldn’t be wrong, but it doesn’t hit the nail on the head. Instead, I’ll call Fury one of the best movies about indoctrination since A Clockwork Orange.

When Collier’s tank gets a new assistant driver, a fresh-faced clerk named Norman (Logan Lerman) with zero combat experience, Collier will beat him, emotionally abuse him, and force him to murder and rape. The strange thing is – the utterly difficult thing about this movie – is that writer-director David Ayer forces you to understand Collier. His only goal is to keep his crew alive. His every decision contributes to this. Everything outside that tank – enemy, civilian – is only there to keep his crew breathing that much longer. 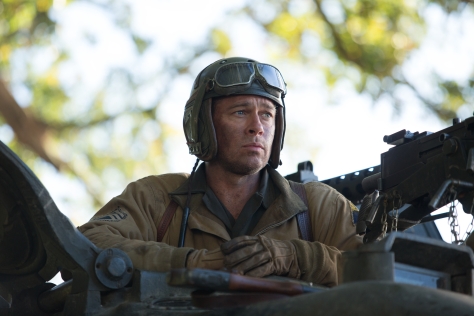 There are beautiful, fleeting moments when Pitt lets you see the toll this takes on Collier’s conscience. This is a man who’s made a judgment that his crew’s survival is worth every other moral transgression. Later in the movie, it’s revealed he knows the Bible verse-for-verse, yet he’s kept this hidden. Why? Because he’s rejected its applicability. Living morally in war, he believes, will get the men around him killed, and they are his responsibility. His duty is to mold men and make them hate – him, themselves, the enemy, it doesn’t matter so long as that hate takes away any hesitation before pulling a trigger.

One of the most nerve wracking scenes involves Collier playing house during a lull in combat. He uses Norman and two German women hiding in an apartment to create a pale reflection of a normal family supper. It’s Collier’s momentary reprieve from war, and yet it’s terrifying for these two women.

Fury is rousing, its tank battles brilliantly intense. Collier is among Pitt’s best characters. Lerman, Michael Pena, and Jon Bernthal deliver nuanced, touching performances as the tank crew, and of all actors, Shia LaBeouf is going to make you cry.

Fury is not interested in being an easy movie, nor a palatable one. It is difficult. There are no good guys by its end, just men who judged for themselves what sacrifices they were willing to make of others, and in their own souls, in order to keep the men beside them alive.

And though many young men aren’t faced with platoons of enemy soldiers, we are often brought up to act as if we will be, to believe the shortest route to strength is in hating some perceived weakness in ourselves or in others. We’re often taught to be manly is to bury sentimentality and sensitivity and mercy in order to make our way in the world.

There is a review for Fury in my head that I will never write, because in some way, every young man grows up with the expectation that we will be willing to trade those pieces of our soul in order to survive, that emotion makes us weak and exerting our willpower on another makes us strong, that our flaws can be cured with our worst behavior. We’ve each been taught our own small portion of perversion. In its own way, Fury lays that bare.

1. Does Fury have more than one woman in it?

Yes. The two women in the apartment with whom Collier tries to play house.

Possibly. Some of their German is subtitled. Some isn’t.

Truth be told, I’d have to watch again to see if they talk only about the soldiers, or if they discuss something else. Most of their interaction is silent because they are so terrified – there’s not much dialogue at all and whether they pass or don’t pass the third rule is essentially immaterial. Their conversation takes place under the fear of being raped, so even if they are talking about dinner, they’re not really talking about dinner.

Can it be forgiven? No, nothing in Fury can be forgiven, and that’s the point. Plot-wise, it’s a movie about a World War 2 tank crew, which were only composed of men. Thematically, it’s a movie about men molding other men by threatening them with violence, making them commit violence, and using peer approval and women as the prizes for doing right (i.e. killing without hesitation).

World War 2 is often considered one of the last righteous American wars. This doesn’t mean it was any easier for those involved. What Fury does best is make us still feel for the men who do these awful things – not just to the enemy, but to each other and to innocent bystanders. We begin to understand why, not to give it a pass, but to comprehend just how mad and hellish struggling for one’s life day after day can become.

To watch characters who commit atrocities and still feel for them, to cry over their internal struggles and shake as their fates are decided…it’s a rare experience in any form of storytelling. The point isn’t that these things are forgivable. It’s that they aren’t, and yet we force soldiers into situations where they will increasingly choose the unforgivable just to stay sane.

By extension, what does it say that we use these same tactics to train and reward men for being “manly” in times of peace, or at home during wartime? To be manly, must we always be in a constant state of war with someone, must we always be finding something new to hate in order to draw strength, must we always beat down the sensitive among us until their own window to hate is opened, so they can become manly like us?

The most important way you can understand Fury is to not forgive it. Ayer and Pitt and those involved have created these characters and moments to be unlikeable for a reason. It’s no mistake that the last person in the world you’d ever expect to show mercy is the one that does. It’s the only time two characters connect in the film, understand each other with all the B.S. removed, see in each other what they’ve lost along the way.

Can Fury be forgiven? I’ll be troubled if it is. It’s the rare piece of art that wants you to talk about why it can’t be. 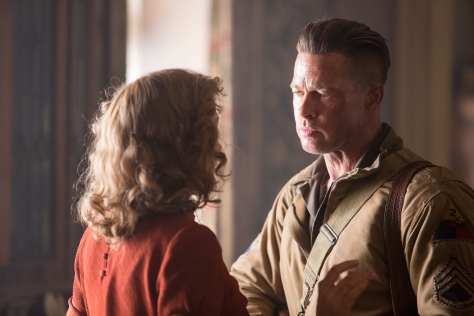