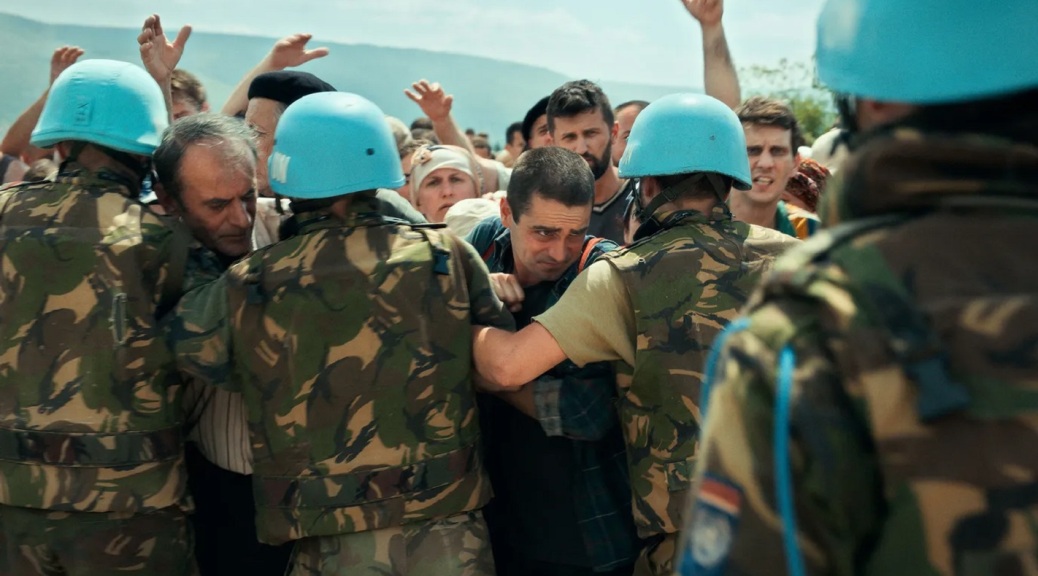 Last week saw this feature take a break due to some technical issues. That means we’re covering two weeks of new shows and movies by women today. That’s a lot for one article, so I’ll just say one thing before diving in. It looks like an astonishing moment for horror movies and thrillers directed by women.

The Falcon and the Winter Soldier (Disney+)
directed by Kari Skogland

Marvel heroes Falcon and Bucky Barnes (the Winter Soldier) get their own buddy action miniseries. From initial appearances, this looks like a more traditional MCU actioner than “WandaVision”. There are six episodes, though they’ll run a nice, long 45-55 minutes apiece.

While Malcolm Spellman is the showrunner, all six episodes are directed by Kari Skogland. She’s directed several episodes of “The Handmaid’s Tale”, “The Loudest Voice”, and “The Borgias”, as well as the two-part premiere of “The Rook”. Her directing career runs back to 1994, and she’s touched on countless other high-profile series.

You can watch “The Falcon and the Winter Soldier” on Disney+.

The year is 2021. The Mighty Ducks have become an evil hockey empire. Who will take them on? Is it Gen X’s older brother Emilio Estevez? Is it Millennials’ TV mom Lauren Graham? Is it a bunch of Zoomers they coach to take on the evil Mighty Ducks? Yes. It is all these things. I should be jaded, but you give me a scruffy-looking Emilio Estevez, a one-lining Lauren Graham, and the promise of countless pratfalls on ice, and I’m already in.

Cathy Yuspa showruns with her husband Josh Goldsmith. The two have written together for a long time, going back to “What Women Want” and “13 Going on 30”.

You can watch “The Mighty Ducks: Game Changers” on Disney+.

You thought that was going to be the only hockey series? Hockey powerhouse Britain (Britain?) has something to say about that.

Kayla is a promising figure skater. She has to leave everything she knows behind when her brother attends an elite hockey academy.

Kirstie Falkous showruns with John Regier. Falkous has written on a number of coming-of-age shows including “Britannia High” and “The Worst Witch”.

Five of the 10 episodes are directed by Tessa Hoffe, a New Zealand filmmaker who’s directed on long-running British shows like “Coronation Street” and “Hollyoaks”.

You can watch “Zero Chill” on Netflix.

A hopeful country singer is missing one thing – a band to back her up. She accepts a job as a nanny to make ends meet. It turns out the family she helps care for is full of musical prodigies.

Creator and showrunner Caryn Lucas has described the show as comfort food. Eight of the 10 episodes in the first season are directed by women. This includes six by Kelly Park (“Call Me Kat”) and two by Leslie Kolins Small (“The First Wives Club”).

You can watch “Country Comfort” on Netflix.

A grandmother may have dementia, may be seeing horrors, or could be facing both. She goes missing. Her daughter and granddaughter turn up to look for her. The film’s been compared to recent horror surprises like “Hereditary” and “The Babadook” in its slow-burn approach to psychological horror.

Director Natalie Erika James chose to make the film look as natural as possible, opting for animatronics, less cinematic lighting, and keeping to a single location.

This is James’s first feature. The Japanese-Australian director grew up in Japan, China, and Australia, and she’s discussed the influence that Asian horror has had on her filmmaking – that horror often comes from restraint and suggestion.

This was previously featured when it hit VOD. You can now watch “Relic” on Showtime, or see where to rent it.

This historical drama takes place during the Serbian occupation of Srebrenica. Aida is a translator for the UN who seeks shelter for her family with thousands of others in their camp. The film from Bosnia and Herzegovina is nominated at the Oscars for Best International Feature Film this year.

Writer-director Jasmila Zbanic has directed both documentary and narrative features that often mirror the complex cultural legacy of the Bosnian war.

Ayse comes home to care for her terminally ill mother. They don’t get much time before her mother passes, leaving Ayse to care for her beehives. She faces issues with their beekeeper and a local bear.

Eylem Kaftan is a Turkish director who’s mostly worked in documentaries up to this point. “Kovan” was one of Turkey’s two submissions for Best Foreign Language Film at the Golden Globes this year.

You can watch “Kovan” on Netflix. That link works, but if you search for it on your own, “Kovan” and “Keeping the Bees” both work.

Justino is a member of the Desana people. He now works as a port security guard in a Brazilian city. He feels like his life is oppressive, and he misses living in the forest. He is soon beset with fever, and stalked by a strange creature.

Director and co-writer Maya Da-Rin is a Brazilian filmmaker and documentarian. This is her second narrative feature.

You can rent “The Fever” through Film at Lincoln Center or through Aperture Cinema.

Rose decides to seek out her birth mother. Doing so unveils a number of discoveries that set her on a path for revenge.

Christine Molloy writes and directs with Joe Lawlor. The pair have written and directed a few films in Ireland now.

You can rent “Rose Plays Julie” on Amazon or Vudu.

You know how it is, you hit a wall in life, find yourself working at an amusement park, and fall in love with a sentient carousel. I think we’ve all been there.

The French-Belgian film is written and directed by Zoe Wittock. This is her feature debut after a number of years working as an assistant director and making short films.

See where to rent “Jumbo”.

Miriam is contemplating divorce. She moves in with her younger sister and brother-in-law. They betray her, and she sets out on a course for revenge.

Madeleine Sims-Fewer co-writes, co-directs, and stars in the Canadian horror film. It’s her first feature as writer or director.

You can watch “Violation” on Shudder.

Genevieve Dulude-De Celles has chiefly worked as a documentary producer. “A Colony” is her first narrative feature as director.

You can watch “A Colony” on MUBI.

The horror anthology is one of the most difficult but fun genres to pull off. Here, five patients who suffer from extreme phobias are tested by sadistic doctor.

Three of the five segments are directed by women: Camilla Belle, Maritte Lee Go, and Jess Varley. Belle and Varley are both best known as actresses; this makes Belle’s directorial debut.

You can rent “Phobias” on Redbox.

Henrik Kauffmann was the Danish ambassador to the U.S. during World War II. When Germany occupied Denmark, Kauffman began acting for a free Denmark. As part of this, he worked with Greenland colonial officials to arrange a treaty that authorized the United States to defend Greenland. Kauffmann was immediately declared a traitor by a now-puppet government in Denmark, but he would effectively lead a free Danish government-in-exile throughout the war.

In the 1960s, he became one of the higher-profile cases of assisted dying, when the pain of his prostate cancer became too much. His wife Charlotte took his life before taking her own – such was the stigma against providing aid in dying at the time.

Christina Rosendahl directs and co-writes, as she’s done in both narrative and documentary films the past two decades. She also sometimes takes up the camera as cinematographer for documentaries.

You can rent “The Good Traitor” on Amazon, Google Play, or Vudu.

“The Craft” was a rare crossover that was both cult movie and pop sensation in 1996. It followed a group of high school students who became a coven of witches. Some of them use their powers productively, others less so. “The Craft: Legacy” is a sequel, albeit one that follows a new group of high schoolers discovering similar powers.

Director Zoe Lister-Jones worked her way from guest appearances to series regular on shows like “Whitney” and leads in indie films like “Lola Versus” (which she also wrote). As a director, this is her second feature after the well received “Band Aid”.

This was previously featured when it hit VOD. You can now watch “The Craft: Legacy” on Starz, or see where to rent it.

CW for next entry: gore

A pair of possessed, homicidal jeans go on a rampage. It’s always up to the underpaid staff to figure it out, and it’s not like they’ll get overtime for it. “Slaxx” is a satire of the fashion industry from ‘fair trade’ sweatshops to marketing campaigns.

You can watch “Slaxx” on Shudder.

A famous novelist hires a nanny to help look after her two children. This lets her focus on her next novel. The only problem is that as she writes it, the details start to come true in her real life.

Writer, director, and producer Anna Elizabeth James has directed a few family films leading up to this. She seems to be shifting into horror with newer projects like “Deadly Illusions”.

You can watch “Deadly Illusions” on Netflix.

Two women road trip to San Diego for Comic Con. One thing leads to another until their trip is a mess of chaos and plot complications.

This is the second feature from writer-director Penelope Lawson after 2017’s “Just Sing”.

This was previously featured when it hit VOD. You can now watch “1 Night in San Diego” on Hulu, or see where to rent it.