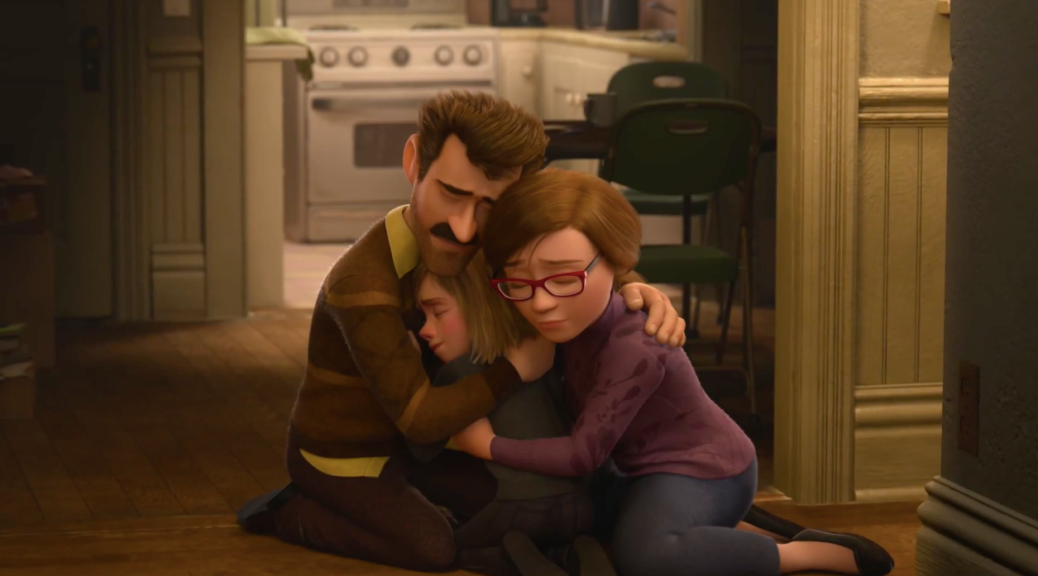 #Note: I’m still writing for AC, but I’ll be focusing more on social and political commentary there, so more of my movie reviews will be appearing in full on this website again, starting with this one:

There’s a famous montage in Pixar’s Up that tells the life story of a man and woman, from their meeting as children to his losing her of old age. It never fails to draw tears from any viewer.

Imagine zooming in on that montage and watching a briefer piece of it. It has the same effect for viewers, but the story’s in much more detail. This is what happens in Inside Out, which many are calling a return to form for the studio that created Finding Nemo, The Incredibles, Ratatouille, Toy Story, and Wall-E. I’ll go one step further: this is one of Pixar’s best films. Inside Out meets and perhaps even surpasses some of the movies I just listed.

Pixar always has a way of getting at the emotions housed inside of certain stages of life. Here, those emotions become characters. Joy, Sadness, Anger, Fear, and Disgust operate 11 year-old Riley’s brain. Joy (Amy Poehler) runs the crew because up until now, everything has gone pretty well having a childhood focused on happiness.

But Riley’s family is moving from the open, rural wilds of Minnesota to the cramped confines of San Francisco. This coincides with Joy and Sadness getting swept out of headquarters, leaving only Anger, Fear, and Disgust to cope with being the new kid at school, figuring out the new town, and trying out for the local hockey team.

We see glimpses of Riley’s life, particularly in how her relationship with her parents worsens. Most of the film focuses on Joy and Sadness’s journey back to headquarters, through places like Long-term Memory, Imaginationland, and even Dream Productions.

By speaking about the imaginary things we lose and by focusing on the tug-of-war between Sadness and Joy, Inside Out actually begins to recall the bittersweet messages of 80s fantasies like Labyrinth, The Dark Crystal, or The Last Unicorn. Those were films that dealt with the loss of childhood and innocence in a similar way: by threatening the metaphorical with real repercussions. Although the style is completely different, Inside Out has many moments that would fit very neatly into those films, including a few that may make you cry. The 60 year-old biker with the tattoos and motorcycle jacket to my right cried. The six year-old and his mother to my left cried. I cried.

Inside Out works. It really, really works because it feels like the rare film that arrives straight from a storyteller’s heart. That Riley is compellingly realized, that it’s filled with slapstick humor, that the animation is filled with color and imagination – these are delightful bonuses. At its core, Inside Out could work without any of them, and it could do so better than any other Pixar movie. I won’t call it the best of their films – I’m not sure that it is. I will call it their most honest one.

In part, this is because Inside Out takes place on a much smaller scale than most Pixar films. It’s not humanity that’s at stake, or even a loved one’s life. All that’s at stake is the emotional wholeness of a young woman. And yet, directors Pete Docter and Ronaldo Del Carmen give those stakes more importance, tension, and emotional impact than all the worlds that have been saved this summer put together.

Is Pixar back? That’s a silly question; they never left. When most major studios have two or three subpar films in a row, it’s called a rough month. Since Pixar only makes a feature film every year or two, what would be the blink of an eye for most studios is for Pixar turned into a narrative about how far they’ve diminished.

Call Inside Out what you like – a recovery, a comeback, a return to form. Just make sure you call it a masterpiece.

It’s a great film for kids, especially because it doesn’t shy away from the kind of complex, emotionally involved storytelling that kids really do love. Sometimes we simplify children’s stories much more than we have to. We underestimate just how invested they can become in a movie that demands their full attention. Oftentimes, they’re even better at it than adults are – they don’t have to break through walls of cynicism to treat what’s happening on-screen as important. Inside Out puts faith in children’s ability to comprehend what’s at stake. It also speaks to the way children analyze emotions and deal with the world around them.

Adults will be taken back to emotional struggles we had at that age and – let’s face it – sometimes still experience. Children will get the first film in a long time that treats their emotions as something complex and worth talking about. And it all happens in a colorful, energetic cartoon that may be Pixar’s funniest yet.

1. Does Inside Out have more than one woman in it?

Yes. Riley is voiced by Kaitlyn Dias and her mother is voiced by Diane Lane. Joy is voiced by Amy Poehler, Sadness is voiced by Phyllis Smith, and Disgust is voiced by Mindy Kaling. A variety of other characters and their emotions are voiced by Paula Poundstone, Paula Pell, Rashida Jones, and a sizable supporting cast of professional women voice actors.

Yes. There are some hilarious moments when boys and men are discussed by emotions, but aside from that it’s really all about the women. It’s a credit to lead screenwriter Meg LeFauve (Josh Cooley and Pete Docter also contributed) that each of the women in this film seems whole. Even the emotional homunculi (the characters inside Riley’s head) who are portrayed by women are more than simple caricatures.

I can’t speak to many experiences or pressures as a young woman growing up that this film may address. I can say that Riley and her emotions are some of the most fleshed out characters that Pixar has put to film, and it manages this through more than just the dialogue. Not only is the screenplay incredibly layered, but the animation is nuanced enough to ask you to read each character on multiple levels.

I also appreciate that Riley is a complex character. This takes place with surface elements: she dreams about unicorns and she kicks butt at hockey. It also takes place on a number of deeper levels: Riley struggles with her own emotions but can occasionally manage those of her parents in ways that defuse their loss of emotional control. She has expectations and struggles with anger when those expectations aren’t met. She can revert into her own private world. She is caught in the midst of becoming more independent. This is a complex portrayal of a young woman, which is something we don’t get to see very often on film. 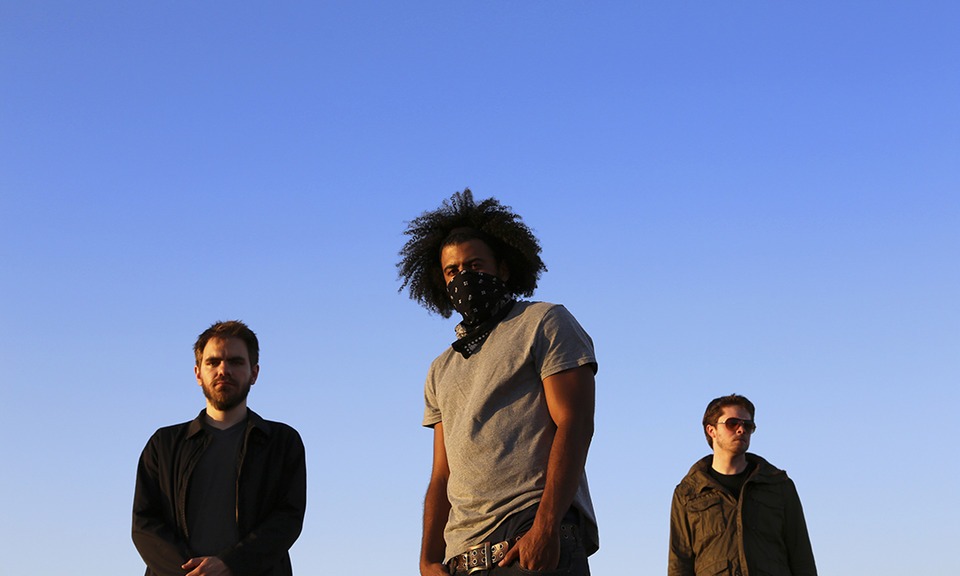 “Makes party music for the club you wish you hadn’t gone to, the car you don’t remember getting in, and the streets you don’t feel safe on; are phantom broadcasts bleeding into Power 106 as you drive out of range; are twenty different rappers looking into one broken mirror, talking to themselves all at once; are classic west coast rap music out of the tradition where sounding different wasn’t cause for fear.”

– Mission statement behind CLPPNG by clipping.

What is clipping.? The purest rap today. Dirty industrial noise. Assaults of static loops. Prayer bells and chimes, mutilated saxophones. Hitting sidewalks with whatever breaks, including the microphone.

CLPPNG is that album everyone knows is important but no one knows how to listen to.

clipping. takes three minutes of a shrill alarm clock. clipping. gives it the musical function of a pipe organ. clipping. makes it beautiful.

clipping. tells the story of a gang’s arsonist who left the life, moments before his ugliest actions return to haunt him:

“No, that was a full
life time ago. When?
Nobody has to ever
know. He has never
told – well except Ronald –
but that don’t count.
He was sweet and
exactly what he
needed him to be
at the time: wine and
candlelight and nice
texts at lunchtime.
Why had he not called Ron back?
Guess there just wasn’t a spark.
Ha! No, no,
mustn’t joke about these things.
Wouldn’t want to disappoint Doc Clark.
So many hours on a couch,
so many buried memories that take
so many tears to get em out.
Water had never been a friend.”

clipping. is something new.

This article is part of our series on the top 35 albums of 2014. Here’s the list as we unveil it.