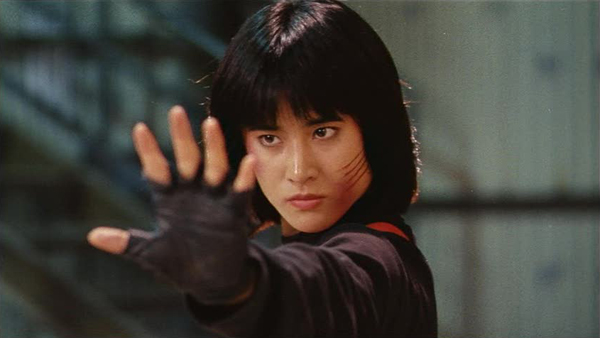 Arguably the most successful karate-based martial artist on film, Yukari Oshima ought to be thought of in the same breath as Jackie Chan. So let’s watch the time Chan choreographed Oshima in Outlaw Brothers.

If none of the female-led Hong Kong films of the 80s and 90s were funded as well, or marketed as broadly, as those of the men, Oshima at least stood the test of time. Half-Japanese and half-Chinese, she was able to act in Hong Kong, Taiwan, Japan, and – once studios largely closed out the “girls with guns” genre – she shifted into a successful career in Filipino action movies and TV as Cynthia Luster.

Oshima’s foundation is a form of karate called Goju-ryu, or “hard-soft style.” Its technique focuses on blocking with a soft body that can accept blows and striking with a hard form that mixes straight-ahead and indirect, rounded attacks in equal measure. This forces an opponent into the defensive as they have to defend more space.

The end fight of Outlaw Brothers (one of her Hong Kong films) stands out particularly well in Oshima’s career. Paired as she often was opposite Frankie Chan, the two face off – and switch face offs a third of the way through – with Jeff Falcon (armed with a fan) and Mark Houghton (armed with a sword). Jackie Chan served as a guest choreographer for the fight between Oshima and Falcon and in martial arts films, the choreographer often choreographs the camera, too. You can tell Jackie Chan’s style instantly – opponents squared to each other, the camera focusing on 90 degree two shots, 60-degree over-the-shoulder shots of the opposite performer, and close-ups to feature the performer’s expression. The beauty of Jackie Chan’s style is that he choreographs and shoots as if filming a conversation, not a fight.

Directors often stressed Oshima’s gymnastic abilities; she was able to mix strikes, cartwheels, and splits together in a way no other performer could. Of course, this also served the sometimes-exploitative elements of the girls with guns genre as well, but take a look at Book of Heroes (a Taiwanese film) for how choreographers who really let Oshima loose were able to mix her gymnastics skills into her choreography:

Oshima worked often with another performer we’ve featured: Moon Lee, whose style mixed kickboxing and taekwondo into the genre’s more classical kung fu choreographies. Lee’s harder, fast-paced style and knack for stuntwork, paired with Oshima’s softer, more indirect style and gymnastic ability, helped create some of the best – and most unfortunately forgotten – choreographies in martial arts movie history. We’ll feature the two as a pair down the road.