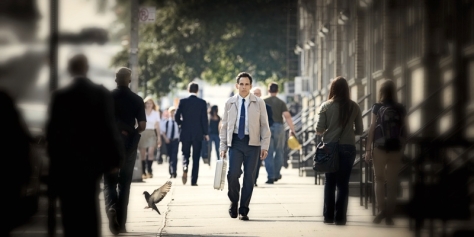 The Secret Life of Walter Mitty is an inspirational tale about Walter (Ben Stiller), who spends years of his life doing little else but going to work, taking care of his mother (Shirley MacLaine), going home, and going to work the next day. Doing your job, being the best at it, and never making a mistake for 16 years straight, like Walter, used to mean you earned a house, the means to support a family, and the security of another 25 years on the job. Now, it means you scrape by month-to-month. Doing the same thing well for a long time means you haven’t advanced, which means you’re expendable in the next company downsizing.

Walter has vivid daydreams of being a mountain man, of having a superheroic throwdown with his boss, or of simply enjoying old age with someone…but life has taught Walter not to take chances, to instead keep his head down and do his work.

Walter Mitty specifically speaks to the generations coming up in this economy. My own generation, hitting 30, was supposed to have the basic building blocks established that could see us through the rest of our lives – house, family, picket fence. We’re a generation that started working at 14, after all. We haven’t stopped, and we’re still repaying our college loans. How can we hope to repay for two wars, a financial recession, increasing ecological crises, and our loans from China? We’re a generation of can-do growing into the realization of, “We may never have the means to.” We were raised to take on the world, to do anything we set our minds to, set instead to scrabble decades on end in a service-based economy. This generation’s yanked on its bootstraps so hard we have welts on our hands, yet we had better opportunities 10 years ago, fresh out of school. It’s terrifying to think we might have even worse ones in 10 more.

Walter himself has worked at Life magazine for 16 years as their manager of incoming photographs. Life is bought out and must publish its last issue before laying off most of its staff and becoming an online-only webzine. Its most famous photographer, Sean O’Connell (Sean Penn) has sent in a photograph he refers to as “the quintessence of life.” It’s to be the front cover of Life‘s final issue. The only problem is that Walter never received it. With the help of his secret work crush, Cheryl (Kristen Wiig), Walter sets out on a journey that takes him to Greenland, Iceland, and Afghanistan in search of Sean and the lost photo. 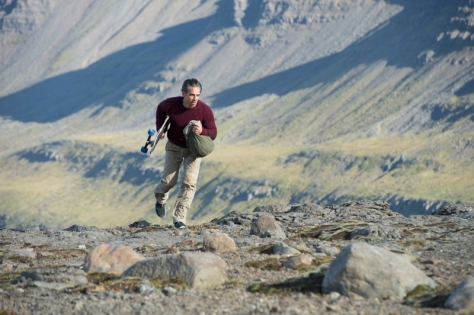 Walter Mitty is a Ben Stiller movie, and sometimes it has too much trouble forgetting it’s not Tropic Thunder. One of two of Walter’s daydreams are oddly placed satires of other genres that belong in some other, kookier, Stiller movie. It’s strongest when it’s more interested in Walter overcoming challenges and becoming the person he once imagined himself. The challenges he faces are outsized rather than personal – a shark, a volcano, handsy TSA agents. The movie glows not when he’s faced with these obstacles, but rather when he’s faced with a choice, such as whether to hop on a helicopter with a drunken pilot to chase down his mystery. This is when Walter’s daydreams aren’t just futile moments of power fantasy; they’re comforts that support him and give him the courage to press on.

Walter Mitty is a schmaltzy film. Its message is simplistic, and this is the thousandth time we’ve seen it. And yet, there’s an earnestness in how Stiller directs and acts out the story that reminds us schmaltz is often heartfelt. He has a point to make, and sometimes we need to hear something for the thousandth time for it to sink in.

Walter and Cheryl seem like ordinary people, like folks we’d enjoy drinks with after work not because they’re special but because they’re low-key and unassuming. Walter Mitty works for me because it celebrates the tenacity and the workaday attitude we’re told this country used to value. Walter Mitty doesn’t make the mistake of thinking it’s our attitude that’s changed. It simply recognizes a country that doesn’t value it anymore.

This is a movie filled with ordinary people who won’t get a sniff of their dreams, and this is the most pressing issue of every American generation coming up right now. It won’t work for everybody – it will be too cloying or uneven for some. It may remind a few more of us, however, that self-sacrifice isn’t the corporate asset it used to be. Taking those chances that bring you closer to who you once imagined you could be – that’s the difference between a good life and one in which you’re expendable.

The Secret Life of Walter Mitty is rated PG for language and action.