Fashion photography took a number of these cues – it began isolating models in the same antiseptic settings. This had the result less of selling clothes than of selling the models themselves. After all, clothes sales aren’t what companies are after – they’re after brand loyalty. You have to sell a product again and again. You have to sell an image once. Over the years, however, buyers have become more and more resistant to commercial photography’s gimmicks. They aren’t nearly as effective as they once were.

So what’s different about Holly Parker? She returns a certain class to fashion photography, replacing hypersexualization with allure. Her models – women and men – are typically posed as strong and complex figures, not as helpless or sullen product. It’s an incredible and important difference.

Think of a photographer much like you’d think of the director of a film. Lighting, angle, composition, retouching and editing – it all comes together to make a huge difference in the shape a model’s performance takes.

Whereas some photographers still stress a model’s gauntness or pose them plaintively, as if they’re a toy waiting to be picked up by the viewer, Parker highlights a model’s muscle and tone. A big part of this is due to her favoring natural light over complex lighting set-ups. The portrayals she gets from models are realistic yet still iconic. They’re more colorful than the overly serious commercial approach to fashion photography, and they stress the landscape around a model as much as they do the model herself.

This may seem counter-intuitive, as if it draws focus away from the model, or the swimwear or dress being sold, but to the contrary – it’s a photographer’s way of world-building. Parker shifts the viewer’s experience from one of desiring the model to one of desiring a time and place – an entire experience. This gives her models greater function, stresses them as performers inside that world she’s built instead of simply as commercial objects.

From a brand perspective, there are any number of reasons to favor presenting an experience over presenting an object. Perhaps that’s for another article – my precise interest lies more in how Parker’s artistry expands the role and power of the models inside her work.

In particular, she has a keen eye for the interaction of focal points, asymmetry, and different levels of shallow focus. This is my favorite shot of hers.

She finds a way to echo the color of the model’s top in the rock face and her skirt in the further cliffs. Moreover, the model’s offset stance – cocked head, arm held across herself, leg bent out – uses her body to direct the eye in a natural manner from top left to lower right along the photo. This is supported in the slightly lesser curve of the rock face, and if there’s one thing the human eye loves, it’s concentric encouragement. There’s a curve on the left, there’s a similar curve in the middle, the brain is visually pleased. The upper right of the shot is largely negative space – there’s stuff there, but it’s soft focus, and so our brain guides us back to the center, where we know there’s a reinforced pattern and we’re more visually comfortable.

This, too, is encouraged by the color scheme – light brown rock, light brown top, white skirt, white cliffs (I know it’s Berkeley Gold and Snow or something, but let’s call it light brown and white). This implies a certain verticality as our eyes go from left to right – as colors grade lighter to darker across an image, our brains tend to want to reassemble that vertically. Darker objects imply distance, reinforcing on a second level the increasing depth of the shot as it opens right. This creates a slight touch of disorientation. Again, this returns us to the center, to an anchored position. I’d be shocked if Parker didn’t retouch to bring the colors of the rocks, cliffs, and clothes closer together. What it all adds up to is a number of concepts that work in conjunction to return our eyes constantly to the fashion at the image’s center.

Now you can just plop fashion in the middle of a photo and your eyes naturally gravitate to it, but what Parker does is some pretty high-level conceptualization – she gives the fashion moment, character, and attitude. She creates a visual anchor while purposely throwing us off so we seek to return to it. What’s most impressive is that she’s not using one trick in isolation – that’s gimmick territory. She’s using several techniques that each strengthen the next.

I’m also a fan of her closer, portrait work:

Again, Parker plays with asymmetry and an empty upper corner in soft focus, but these qualities alone don’t amount to a great photo. They have to be part of a more complex whole. There are vertical and horizontal bisections happening here. Where the high collar meets the horizon behind the model creates an implied line across the entire photo, and where the shadow takes up the left third of her face (as we look at her) gives us a strict lighting separation.

This means the smallest quadrant – the upper left – is also the heaviest in terms of image. It’s dark due to shadow and it’s busy due to the model’s hair being pushed over. Our eye is encouraged to find a simpler, brighter position to start. The head wrap creates a very easy transition for the eye to escape right, where that soft focus corner again makes the eye go a little crazy. The out-of-focus sky has no texture and we want detail, so our eyes hook onto the top the model’s wearing – its texture is a repeated, orderly detail that creates a comfortable visual anchor in the image.

Stand back and look at the image – even after I’ve told you all this, your eyes go from upper left to upper right before making a diagonal cut to the center. Again, Parker’s disorienting you a little bit so that she can take charge of your eye and guide it through the photo the way she wants. This is what I mean by combining focal points, asymmetry, and shallow focus. Your eye doesn’t just shoot to the center. Parker directs it along the path she wants you to take.

She also breaks the rules and can be a little Werner Herzog with some of her contextual details. You typically don’t want an ocean background tilting to one side. But ask me if it matters given the performance she’s captured from her model. 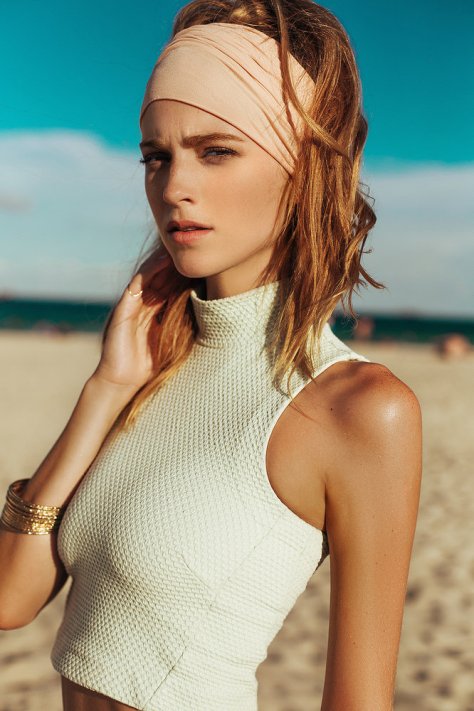 This isn’t a perfect shot – there’s less technique here – but it’s one that communicates a hell of a moment. Most photographers – even most fashion photographers I know (sorry, guys) don’t have Parker’s knack for capturing the smaller moments of her models’ performances, let alone her ability to guide the eye in a way that suggests the experience of world, story, and character. Now, Parker does have a few faults. Her photography of men isn’t quite as assured, but it’ll get there.

Specifically, her preference for using natural light to show off both tone and imperfections like smile lines will be of terrific advantage. She knows how to build story and character out of these. 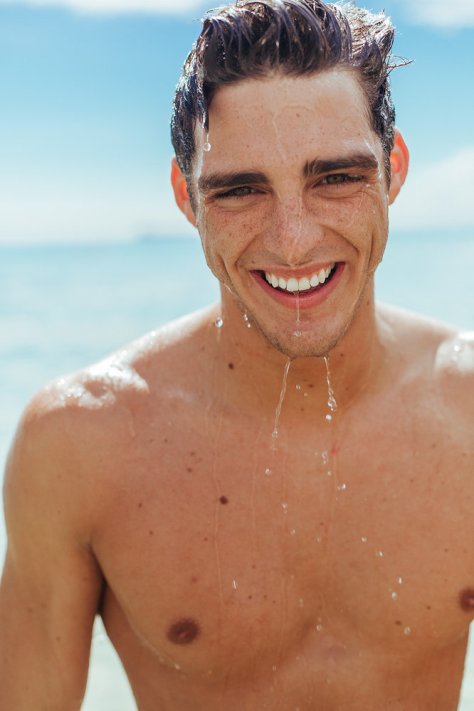 I’m highlighting Holly Parker because…well, it’s my job as a critic to point out the artists whom I hope are the future of their industry. Sure, Parker’s a woman in a male-dominated industry. She’s also a step ahead in the awkward, industry-wide transition from commercial-influenced fashion photography to a brighter, more character- and experience-driven style. I also feel her work is a far more empowering presentation of women in fashion than much of what’s been generally accepted in recent years.

More than anything else, however, Parker’s doing it in ways you don’t typically see in fashion photography, employing complex, intersecting framing and visual techniques across multiple levels. I’m analyzing her technique in the same way I might certain classical paintings, or a P. T. Anderson long-take. That’s certainly not true of most photographers, not at this level of complexity.

I’m not saying she’s Dorothea Lange or Alex Prager just yet. Her photography still speaks of someone who’s harnessing all these gifts. She’s still figuring out when and how to use them, but the intrinsic talent she’s showing at a very early stage of her career is phenomenal. Parker’s a superior talent and if she can continue to develop her own style and add even more tools and technique to her repertoire, I very much look forward to seeing more of her work both in the fashion industry and outside of it.

What I’ve analyzed here are just a few images. Visit her site if you’d like to see more of Holly Parker’s photography, or her work as a model.