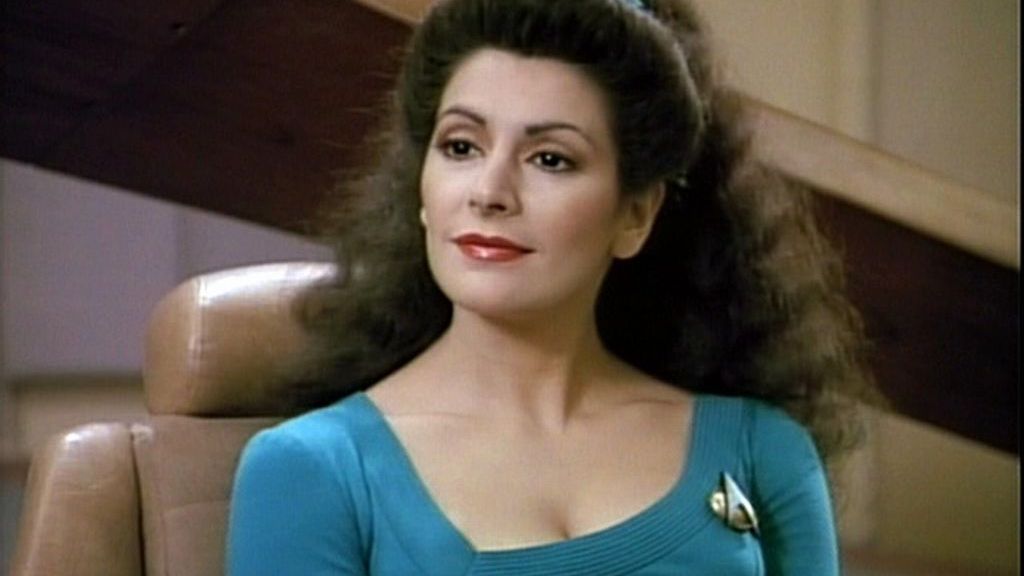 I was raised on Star Trek. In The Next Generation, male power figures struggled to connect with their emotions (Picard, Worf, Data).

On Deep Space Nine, they struggled to contain their anger when the universe took away the things they loved (Sisko’s sanity, Worf’s wife, Bashir’s research and humanity, O’Brien’s pretty much everything – I think the writers made it their mission to obliterate O’Brien twice a season).

On Voyager, they struggled to be commanded by a woman, not because she was a woman – mind you, Star Trek posed a civilization too advanced to be dealing with that – but because she was the Yul Brynner to their rag-tag, rowdy Magnificent Seven (Chakotay, Paris, the Emergency Medical Hologram). The metaphor, however, was pretty clear.

These struggles with male expectations often proved to be the most difficult obstacle for a plot to overcome. For all the derision heaped on Counselor Troi in Next Generation – the running joke in a lot of the show’s criticism was that she was useless – she may’ve been the most crucial cog in that entire crew, constantly coaxing men to get over themselves and experience another person’s or culture’s perspective. She may have saved the Enterprise more than any other character, not through the orders she gave or actions she took, but by helping the crew to inhabit situations from the perspectives of others.

Picard goes through the ringer several times – indoctrination by the Borg, torture by the Cardassians, living a whole other alien life because of a mysterious space probe – and it’s always Troi bringing him back from the edge. She helped Data achieve his goals of becoming more human by introducing him to concepts of art, empathy, and social responsibilities outside of his duty. She talked Worf out of suicide countless times. The suicide was always ritual – cultural – but it came at times when Worf was afraid of dying in a way that wasn’t warlike enough – that wasn’t manly enough. 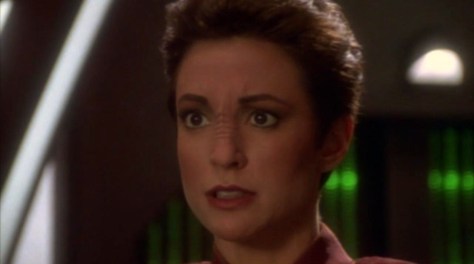 On Deep Space Nine, while Sisko and Worf and O’Brien struggled with their personal losses, it was Kira Nerys – a survivor of genocide who had lost her family, culture, religion, and most of her species – who held it together the best. There were times the others were barely fit to command, and would risk crewmates or shirk their responsibilities in order to exact vengeance, but Kira was the one who could fight for a cause one minute, and look her enemy straight in the eye and relent when it saved lives. (If you’re at all a fan of science-fiction, Deep Space Nine is on Netflix and Hulu. It is the best science-fiction show ever put to television, with the possible exception of The Twilight Zone.)

On Voyager, Captain Kathryn Janeway incorporated a band of rebels into her crew, relied on a convict navigator, a holographic doctor, an officer who was essentially reconditioned from a lifetime in a genetically enhanced cult, and even – at points – the son of an omnipotent being. She made decisions more quickly and more fairly than any other captain because she came fully in tune with her own emotions – she didn’t have the same struggles as Picard or Sisko – and constantly approached situations from the perspectives of her opponents. She was Counselor Troi and Captain Picard all rolled up into one.

So Next Generation showed me that being manly, being Rocky or Rambo, could cause more problems than it ever solved. Solutions came through the diplomacy Picard represented, yes, but true diplomacy could only be achieved through the empathy Troi championed. Deep Space Nine showed me that relying on my anger would only risk those around me, that anger is self-perpetuated and can destroy better solutions in order to maintenance its own survival. And Voyager showed me that sometimes men should shut up and listen, not because women know more or have better opinions – it’s all pretty much equal – but because our society gives men so many more chances to speak that we can’t benefit from the opinions we never hear.

But then came Buffy the Vampire Slayer, and its men whined and pouted and spilled their feelings willy-nilly, while the women kicked ass and got things done. Creator Joss Whedon is often criticized for making women strong by making them literally, physically strong rather than emotionally or mentally, but that’s a false argument to me. Buffy coped with heartache and breakup and becoming a single parent to her sister while dealing with the end of the world and staking vampires through the heart. Guys like Angel and Riley couldn’t do both at once – they would get sidetracked by bottled-up emotions they had failed to deal with and lose sight of the fight at hand. At times, they may have been Buffy’s physical equals, but they were never her mental or emotional equals. They had a lot of maturing to do before they could make that claim.

Fast-forward to the spinoff Angel and even Valley-girl Charisma Carpenter became the war-wearied voice of reason and unofficial leader of the pack, allowing Angel to continue his more personal quest to become the moodiest moodster in Moodytown.

You know what, though? Angel became a better person – he literally gets his soul back – by connecting with those around him and sharing his feelings. Clutzy, nerdy Xander becomes a leader precisely because he was so emotionally honest in his formative years – he had learned to deal with his emotions rather than hiding them or pretending they weren’t there. Giles is perpetually himself and doesn’t feel any pressure to be any other way. It keeps him sane through some pretty messed up plot. So Buffy might have strong women, but I’d already bought into that idea. It was important to have that reinforced, but just as importantly, Buffy featured men who understood it was OK to be weak, to talk about your problems and, yeah, to whine. And that was pretty crucial for me to be exposed to.

None of these shows on their own finished painting the picture, but all of them combined helped me place different priorities on what was important in “being a man.”

I didn’t see them in a vacuum either – they were informed by Schwarzenegger and Bruce Willis styled action roles. Yet when I watched those roles, they didn’t seem like the examples of manliness they were supposed to be. I saw pieces missing. I enjoyed their exploits, but they never seemed like full characters.

There’s a reason that male Marvel heroes spill their guts and confront each other about their emotions now. It’s not because Whedon’s in charge of them either – they did that before he came on board. It’s because shows like Star Trek and Buffy forced science-fiction to grow up when it came to how men and women related to each other. Schwarzenegger and Stallone stopped feeling real to enough people, they stopped having as much function for viewers; men who were strong because they shared their emotions started feeling more real and started being more useful.

We often talk about how geek culture took over – I don’t think it did, at least not because it’s specifically geek culture. I think science-fiction, comic, and fantasy fiction were the only genres that let us progress as a storytelling society and so, like water flowing down the path of least resistance, we gravitated toward the genres that allowed us to evolve our storytelling and the kinds of characters we felt were important.

We still watch the old-fashioned movies, and there’s still a lot to fix in the new ones, but it’s nice to know that Troi and Kira and Janeway all helped explain (along with the voices of friends and family) that there were better ways to solve problems than just beating them up, that empathy was more important than dominance, and that characters like Picard, Worf, O’Brien, and Chakotay would be less successful, or even dead, without the benefit of empathy, understanding, and compromise. That paired well with Buffy telling me it was better as a man to talk about emotions and move on than to be tough, hide them, and never cope. Voices of women not only saved other characters from science-fiction and fantasy predicaments, they saved science-fiction and fantasy themselves. 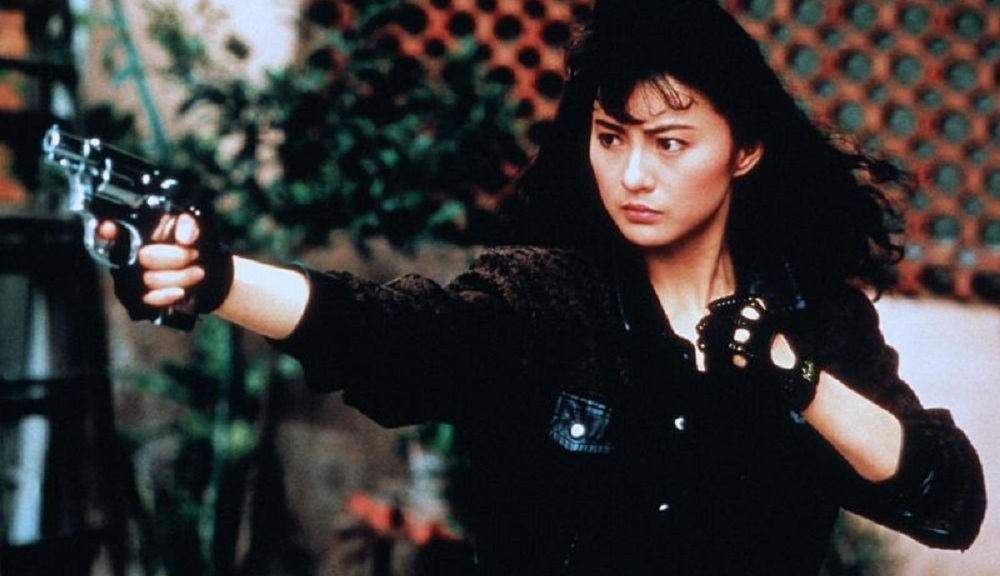 Female martial artists have rarely had the opportunities of their male counterparts. Even when Hong Kong saw the rise of the profitable “girls with guns” genre, producers treated these like exploitation films. Women performed martial arts, yes, but they were also trotted around in various states of undress and often needed last-minute rescuing from the male lead. There was also a certain brutality toward women in the fights that wasn’t always shown toward the men.

The Iron Angels series, also known as Fighting Madam, Angel, or Midnight Angels, exemplified the best and worst traits of the genre. It established the genre as viable on a bigger scale while introducing defining female martial artists like Moon Lee and Yukari Oshima to many martial arts fans in the West who hadn’t seen their smaller, earlier films. When the first film proved successful, however, its 1988 sequel backseated the women in favor of focusing on the exploits of Nathan Chan.

It is noteworthy that this sequel was co-directed by Raymond Leung and Teresa Woo. Women (as in the U.S.) rarely direct in Hong Kong or Chinese cinema, but Woo was a writer/director who enjoyed brief success.

We’ll focus on that sequel here, but I’ll feature a great fight from the original down the road. I want to focus on Moon Lee today because her choreography reflects the blending of kung fu, taekwondo, and kickboxing that was taking place in Hong Kong cinema at the time. Jackie Chan had originally infused kung fu films with his zeal for risky stunts. For years, he had also been bringing in foreign martial artists in order to vary up his choreography and the skills of the opponents he faced.

What Jackie Chan did, everyone did. This blending of styles was becoming very popular and what we think of as older, more rigid “kung fu” choreographies could become repetitive to audiences on their own. Moon Lee was one of the best – male or female – in terms of shifting into choreographies heavily informed by stunt work and non-traditional, “post-modern” martial arts.

The best fight in the entire Iron Angels franchise takes place between Moon Lee and fight choreographer Yuen Tak. It’s a condensed, no-frills fight where the two go toe-to-toe after she beats the snot out of his Lieutenant. (You’ll also see Elaine Lui there right at the end.)

It’s a shame Moon Lee and her contemporaries are rarely thought of in the same way that Chan, Jet Li, or Donnie Yen are. They were just as skilled, but no one with influence was interested enough in pushing female-led films.

This didn’t really begin to happen until Jackie Chan saw Michelle Yeoh practicing choreography for his 1992 film Supercop, and he delayed production to have the entire film rewritten with her as his co-lead. And, as we know, what Jackie Chan did, everyone did. That’s not to say things are at all equal today, but a lot changed thanks to Yeoh pushing the boundaries with her talents and Chan realizing what he’d overlooked for so many years.

Moon Lee’s film career was finishing up by this point, though she would continue to enjoy success on television. Within the parameters of what the industry allowed at the time, her career was massively successful. It’s just a shame that this still means we rarely think of her today. In the fight scene above, you can see why we should.