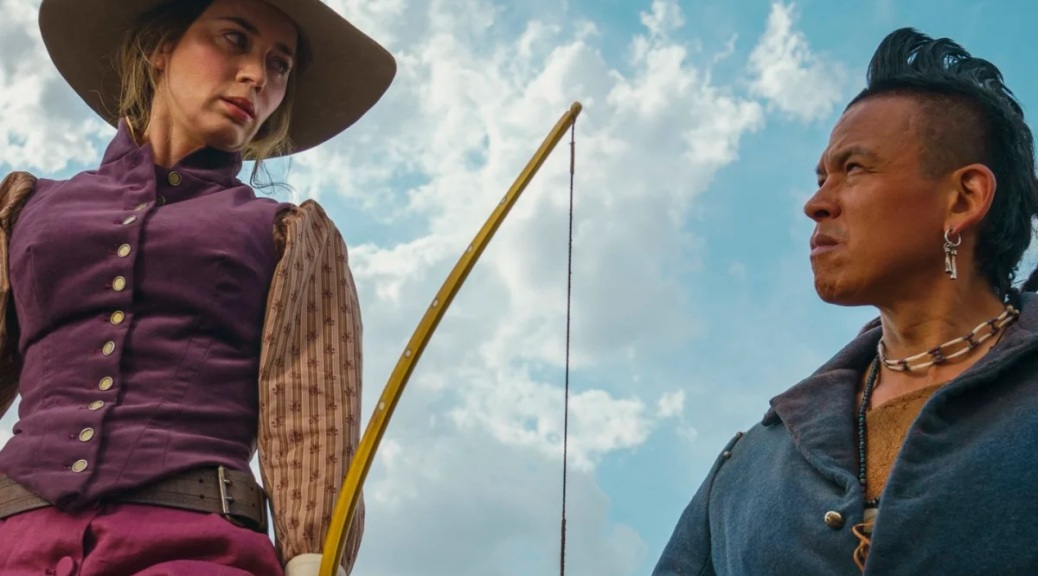 “The English” is a revisionist western that’s both masterpiece and constantly flawed. It’s deeply moving, yet can also feel like it’s just a little too off-center from its own reality. Let’s get this out of the way first: “The English” is one of the most beautifully filmed series of the year. Its cinematography is up there with “Pachinko” and “Cracow Monsters”. There are outdoor shots here that could only have offered brief windows to capture each day, when the sun was at just the right angle to create the perfect shadow in a cloud of dust. The visuals can strike pure awe.

Emily Blunt plays Lady Cornelia Locke, come to the American West during the heyday of the genocidal annexation of Native lands. She seeks vengeance against the man who killed her son. Chaske Spencer plays a man with many names, but who most English know as Eli Whipp. A Pawnee scout for the U.S. Army, he was raised to sergeant by the end of his service. Yet as the series tells us from the outset, the minute he leaves the army, he’s just another target for every white settler.

The pair meet as both are nearly killed. Locke’s target knows she’s coming, and Whipp had the audacity to politely ask for a drink at a bar. Obsessed with the latest fads such as astrology, Locke is convinced their meeting is fate. Whipp is just heading north to settle on a piece of land. He’s reserved, cautious to let anything out, but he agrees to accompany her until their paths diverge. The West they travel through is rife with danger, so even getting that far is a blood-soaked nightmare.

Each sequence is tense and beautiful. Some are exemplary of the violent era of Clint Eastwood-led Spaghetti Westerns. Others can echo the pointedly anachronistic dialogue of a Tarantino period piece. Scenes of clever banter between Locke and Whipp are framed like the romance subplots in a 50s Western. There’s clearly a mastery of every era of Western at play in “The English”, but sometimes they’re piled on top of each other to the point where the boundaries lack clarity.

This makes the pacing…unpredictable. A few scenes cut from one to the next with no transition to suggest time passing or places changing, careening ahead at a breakneck speed. This contrasts sharply to the care taken in measuring distance or time-to-travel at other points in the series.

At other times, “The English” takes things very slow, melting into nuanced dialogue and investigating every detail of a room. The sense of language and place here can be remarkable. But then again, nearly every dialogue starts with the characters knowing more than you do, even about non-dramatic elements like their own decisions. That means even in these lulls, you have to fit details into a picture and race to keep up.

Now add to this a story of cattle-rustling by Locke’s target in a completely different area. That shouldn’t confuse things too much, but this parallel story is told to us in a confusing way that asks us to have faith it’ll clarify later.

This means we have genres played very differently piled together. That’s OK. It gives us stop-and-start pacing, which is fine. Faster moments can lack some context, and slower moments are sometimes written so that we theorize the context before it’s told. That’s also fine. Cutting away to a parallel but linked story where the context is actively denied us? That can work. Each of these elements is something that can function on its own. Shove them all together without clear reasoning and what you’re left with might make you shrug your shoulders, give up on the larger arc, and just enjoy the episodic elements, character development, and beautiful scenery. That’s still a lot to love.

So much of “The English” is depicted with crystal clarity. You can see for miles in many visuals. Blunt and Spencer each get a few of the best dialogue scenes of the year. And while I get that making things indirect and confusing also aids in many of the themes of “The English”, the feeling that this is all intentional gets lost.

As viewers, we perceive whether a storyteller is confusing things intentionally, or because their storytelling lacks needed distinctions. That doesn’t mean our perception about that is always accurate, but one of a storyteller’s responsibilities is to make the viewer feel as if the confusion is intentional. To feel comfortable going forward in confusion, we have to trust that the person confusing us has an intent in doing so.

Showrunner Hugo Blick makes clear that he has a plot reason for doing this throughout. The problem is one of presentation. The biggest place this rears its head is with some of the acting. As remarkable as the setting, leads, and cinematography are, there’s something missing in a branch of the supporting acting. It’s as if not everyone is clear on what type of series they’re in. The Tarantino-esque characters shoot self-aware dialogue from the hip. Conflict invites more serious and dramatic takes. Meta conversation about the themes feels essentially modern. Blunt and Spencer glide across all of this with skill, and it’s powerful when the story can do the same. Yet fairly regularly, some supporting actor will drop in playing a different genre than the one we’ve shifted into. This can feel unintentional and even obstructive.

Even if Blick knows exactly where he’s going and has told the leads and his crew, it can feel like he’s often forgotten to convey this to the supporting cast. Now, there are some who can encompass many genres at once. The Native American and First Nations actors are routinely the best part of their scenes. Kimberly Guerrero, Gary Farmer, and William Belleau each elevate the series by making their supporting parts feel inhabited and grounded. Similarly, new immigrants played by European actors who retain their accents work well.

The only place I felt the reality of the performances slipping was in actors portraying characters who had supposedly been living in the U.S. for a few generations. Many are played by British actors, and I felt like something was missing here, as if the performances are played up instead of inhabited like so many of the other supporting roles.

The good performances here are great. Blunt can switch between being a garrulous, fad-obsessed open wound to an incandescent, determined killer at the drop of a hat. Spencer hides a complex, torn, and traumatized character just underneath a stoic surface. Farmer can balance the overly friendly against the existentially threatening. It can all be captivating one moment, but then Nichola McAuliffe sweeps in like she’s been charged with a Mad Max-Game of Thrones mashup.

Within the larger plots, and within individual scenes, there’s just a little too much of some actor coming in who doesn’t know the scene’s swapped genres from the last. That’s usually not the actor’s fault, but rather a bad choice or miscommunication in direction. Blunt, Spencer, Farmer, Guerrero, they can all re-immerse you in a word or a look, so it can only do so much damage…but when it happens on top of pacing issues, dialogue that approaches context as backfill, and an antagonistically confusing parallel plot, it’s constantly noticeable.

The considerable number of elements in “The English” that work ought to make it the best series of the year. For good stretches, it feels like exactly that. I have no problem highly recommending it. You’ll rarely see something this beautiful. Yet it gives itself so much extra, unproductive work to overcome. I like that it’s not streamlined, that it treats meandering as an assertive storytelling act, that it breaks down attitudes of integration vs. assimilation, that it bluntly criticizes the reality of American colonization and expansion, but then some actor will waltz across like it’s Tarantino by Will Ferrell for a few lines and I’ll just wonder what the hell is happening. Then Blunt stabs someone in front of that Spain-as-Wyoming countryside and I’m right back in. “The English” is a great series, if you can overcome its narrative and tonal jolts.

You can watch “The English” on Amazon. There are six episodes.