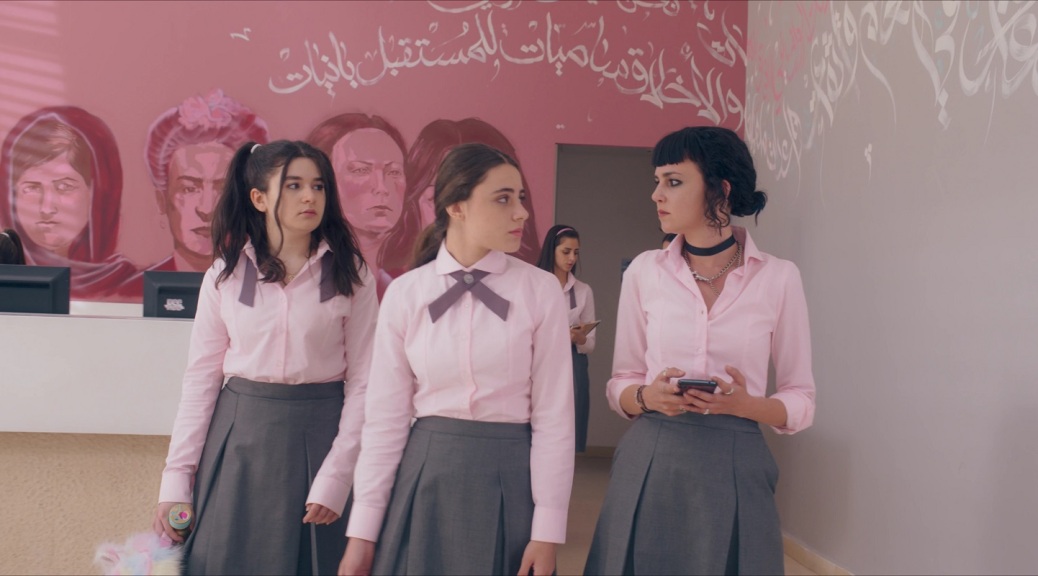 I was worried when I only found three projects combined over the last two weeks. Was the pandemic’s impact on productions finally being felt by streaming platforms? I hoped it was just an early August slowdown and that seems to be proving out. This week sees five new series by women (plus one I missed last month) and five new films by women making it to streaming services.

Outcasts at an all-girls school in Jordan plot to get even with their bullies, but who the outcasts and bullies are is constantly shifting.

Tima Shomali directs the series. Shomali broke through as a writer and actress on YouTube series “Bath Bayakha”. It allowed her to circumvent an Arabic comedy world that (much like our own) can limit opportunities for women.

You can watch “AlRawabi School for Girls” on Netflix.

Lisa Nova is an awesomely named director in 1990 Los Angeles. She wants revenge on a producer who wronged her. Enter Boro, played by Catherine Keener. She offers vengeance of the supernatural kind.

Lenore Zion showruns with Nick Antosca. Zion has written on “Ray Donovan” and written and produced on “Billions”.

You can watch “Brand New Cherry Flavor” on Netflix.

A mother ingratiates herself with the family of the man responsible for her son’s death. Once accepted into his home, she plots her vengeance.

Writer and showrunner Gaby Chiappe was a co-writer of last year’s “Misbehaviour”. This is one I missed last month.

The trailer mentions BritBox, but that’s only in the UK. You can watch “The Beast Must Die” in the U.S. on AMC+.

Amid uprisings and assassination attempts, a king replaces himself with a performing clown who looks nearly identical. Now his replacement has to avoid murder attempts and giving away his real identity.

This is based on “Masquerade”, a Korean movie that is inspired by Mark Twain’s “The Prince and the Pauper”.

You can watch “The Crowned Clown” on Netflix.

The 70s drama returns in a new form. Rather than a reboot, it’s a soft continuation of the original, which features an island that grants people’s desires for a price.

Elizabeth Craft and Sarah Fain run the show. They first worked together on “The Shield”, and since have written and produced on “The 100” and “The Fix”.

A demon finds herself transported to the real world in this anime series. The only problem is that she arrives without any of her powers.

Mirai Minato has been prolific in the last two years, directing series like “Bofuri: I Don’t Want to Get Hurt, So I’ll Max Out My Defense” and “Our Last Crusade or the Rise of a New World”.

“The Great Jahy Will Not Be Defeated” is simulcast in the U.S. on Crunchyroll. New episodes arrive Saturdays as they air in Japan.

Ruby is the only hearing member in her family. She helps them with their business, but wants to pursue music school.

The deaf characters are played by deaf actors. Actor Marlee Matlin threatened to drop out when financiers attempted to cast hearing actors in their roles. Early reviews have indicated that the film approaches cultural deafness inclusively.

You can watch “CODA” on Apple TV.

Together Together (Hulu)
directed by Nicole Beckwith

A man in his 40s wants a child, but he doesn’t have a partner. A woman in her 20s becomes the gestational surrogate. The two become close friends. Ed Helms and Patti Harrison star. The supporting cast is also pretty strong, including Tig Notaro, Fred Melamed, and Rosalind Chao.

You can watch “Together Together” on Hulu, or see where to rent it.

The Cloud in Her Room (MUBI)
directed by Xinyuan Zheng Lu

A woman returns home for a spring festival. Her mother and father have both pursued new lives, separate from each other. Zhao Muzi feels both comfort and out of place in the town where she grew up. The different roles she plays are reflected in the fragmented nature of the film.

This is the first feature for writer-director Xinyuan Zheng Lu.

You can watch “The Cloud in Her Room” on MUBI.

Bleed with Me (Shudder)
directed by Amelia Moses

Two best friends get away to a secluded cabin in the dead of winter. One becomes convinced the other is stealing her blood.

This is the first feature for writer-director Amelia Moses.

You can watch “Bleed with Me” on Shudder.

And this is the second feature from Moses: Grey keeps having visions of being a wolf. She’s invited to work with a music producer at his secluded mansion in the woods. She brings a friend along for safety, but as she works, she begins to transform into a werewolf.

You can watch “Bloodthirsty” on Shudder, or rent it on Google Play or Vudu.

If you like what you read on this site, consider subscribing to Gabriel Valdez’s Patreon. It helps with the time and resources to continue writing articles like this one.