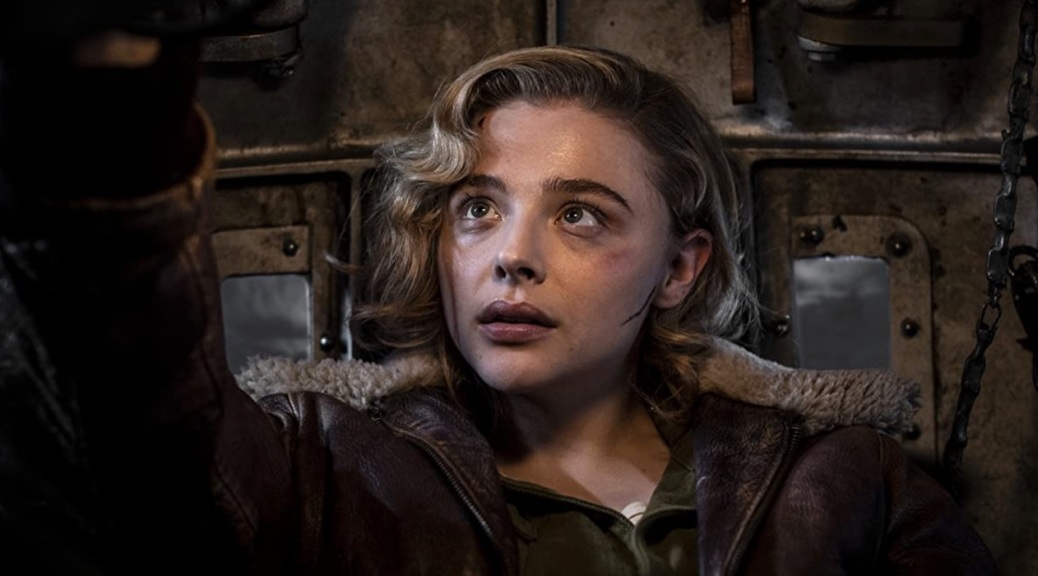 The first half of “Shadow in the Cloud” is one of the most perfect pieces of cinema I’ve seen. It nails an atmosphere of mounting dread with the precision of early Spielberg and an assured retrowave aesthetic. Chloe Grace Moretz plays Maude Garrett, a pilot in the Women’s Auxiliary Air Force who boards a B-17 Flying Fortress as last second crew. It’s the middle of World War II, and her mission is to ferry a satchel across the Pacific. What’s inside that satchel is confidential.

She’s soon parted from her charge and locked in the plane’s bottom turret. The bomber had a crew of 10 and several turrets. One was on the belly, guarding the plane’s exposed underside. It overlooked thousands of feet of empty air. This is where the first half of the movie takes place.

On her radio, Maude overhears how the crew of men speak about her. They talk about fucking her, dismiss her concerns, challenge her mission, and refuse to believe her sighting of an enemy plane. Worse yet, there’s something climbing across the plane, a lurking shape that’s tearing out key parts piece by piece. When they won’t even believe the ordinary when she says it, when they charge her with hysteria simply for reporting what she sees, how can she report what seems impossible?

Moretz realizes a spectacularly written screenplay in what becomes a riveting one-woman show. Writer-director Roseanne Liang puts on a clinic of horror cinema. The sky is dark, full of shadows and lightning. Unsettling details mount: hydraulics hanging out under the plane, a hole in the turret’s glass, a shorn screw as thick around as your finger. What she hears on the radio with the crew, Maude imagines visually for us in deep reds and blacks.

The first half of “Shadow in the Cloud” is one of the best horror experiences I’ve had in my life. Then the second half happens. The second half feels rushed. There’s a reason the most effective moments in “Jaws” are the ones where we can’t see the shark. The moment that one-woman show changes into a more traditional action movie, it loses something key.

That rhythm of Liang’s dialogue, Moretz’s performance, the atmosphere of being trapped and disbelieved, and the awesome texture of Mahuia Bridgman-Cooper’s synthwave musical score combine to create something genre-defining, but it loses its magic when the film has to move on to resolutions. It’s still a solid film, but when you go from all-time great to OK, you can feel that swing as a viewer.

The second half of “Shadow in the Cloud” does hold onto that magic for a while, largely through Moretz’s performance. There’s also an audacious sequence under the plane that’s so driven and ambitious, and shot so creatively that I couldn’t have cared less if the seams of a low budget peaked out here and there.

The problem is more that the first half is so patient, exact, and grounded, and the second half accelerates without paying off on that pace. What was a mastercraft becomes a solid action B-movie, albeit one without enough rhythm or time. Many of the beats of the second half are good ideas, though your mileage on one particular twist may vary. The ending is just shoved into too short a time that makes it feel checklisted and predictable when the first half was anything but.

That truly unique, assured aesthetic that fuses war movie, “Twilight Zone”, “Amazing Stories”, 80s horror, Hitchcock, and social commentary together feels sidelined. The script shifts from nearly all-dialogue, expertly written, to very little, most of which we’ve heard before. It goes from Moretz absolutely living and breathing the rhythm of the movie, to the scenes rushing her and the other actors. There are times that the last half hints at a punkier, more meta, even cartoonish attitude that could’ve taken over, but it doesn’t have the time to make this shift fully enough.

That first half is so good that none of this stops “Shadow in the Cloud” from being a movie I like and recommend. It’s just that first half is a cinematic holy grail. It is magic. It’s what you sit down and hope every movie is as a critic. Forty minutes in, the thought was forming that this goes up there with “It Follows”, “Alien”, “The Orphanage”, “Ravenous”, “John Carpenter’s The Thing”. Almost nothing achieves the tension this can. I mean, look what it can do in two minutes:

And the second half is a sillier, often rushed action movie. It keeps the thread on its social commentary, but even this can feel rushed at points. It may have been more effective in a film that was able to sustain that early energy. Moretz carries the first 40 minutes of the film through the dialogue, and Liang through patient, stylized directing. If they’d found a way to carry it this way through the last 40 minutes (or extended it to 60 or so minutes to allow that same textured approach), I think it also could have capitalized on what it set up in other ways. This could’ve made that social commentary even more effective. I also think if they’d managed that, I’d be calling “Shadow in the Cloud” one of the best films I’ve ever seen.

Do half a film that’s utterly perfect and half a film that’s uneven and rushed equal a good film? Yeah, no question. Some films don’t start well, but come together in the end and we’re perfectly fine with calling them good. A movie that starts perfectly, but doesn’t bring all those strengths through in the end will be enjoyable in different ways. It may challenge our concepts of what in the storytelling makes it satisfying, but I’m deeply glad I watched it and got to see something as spellbinding as that first half. A lot of good, more consistent films never even approach 5 minutes like that, let alone 40.

I’d also point out that a 40-minute first half and 40-minute second half equal an hour-and-20 minute movie. Take that, kids who don’t think they’ll use math as adults. You’re not sacrificing a whole evening to take a chance on “Shadow in the Cloud”. The film as a whole is so wild, opinions on how well it carries through that initial energy and tone are going to vary a lot.

This is something I know I’ll go back and watch, even if the viewing experience does feel inverted. It is so unique, knowledgeable about the genre foundations on which it stands, and deeply ambitious and creative. Those first 40 minutes are one of the most rewarding movie experiences I’ve had. As I sit with it longer and longer, I like “Shadow in the Cloud” more and more. It’s just so much of what I want to see on screen, even if the conclusion doesn’t pull through.

I’ll certainly keep an eye out for Roseanne Liang. Anyone who can write and direct that singular a stretch can make a great film.

For her part, Moretz is proving she wasn’t just a child actor with an off-kilter taste in projects. Few actors can carry a project alone on-screen for this long, few actors can haul a film ahead regardless of whether it loses its footing, and few actors embody the social commentary of a project this effectively through their character.

“Shadow in the Cloud” is available on Hulu, or see where to rent it here.