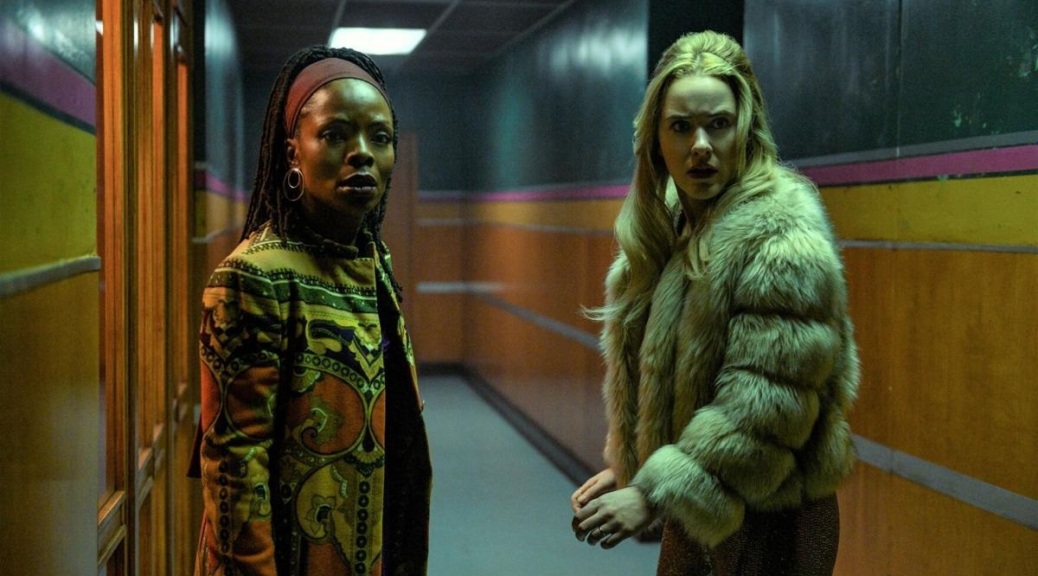 The movie itself isn’t such an academic exercise as that opening paragraph, though. It’s intense and nerve-racking. Writer-director Julia Hart knows exactly how to put the audience in the uncomfortable spaces a slow-burn thriller like this requires.

The premise is simple. It’s the 1970s. Jean’s husband is a thief. There’s a knock on the door one night and she’s told she needs to go on the run. Of course, her baby comes with her. There’s very little preamble. The movie gives you the sense that something is wrong from the opening shots. Not 10 minutes have passed before it steps into an intensity that won’t let up until the credits roll.

We follow Jean as she’s helped by a former associate of her husband’s, Cal. He tries to hide her from both the mob and the police.

Jean is played by Rachel Brosnahan, and if you wondered whether she can carry films or other genres as deftly as she carries a series like “The Marvelous Mrs. Maisel”, “I’m Your Woman” makes the question irrelevant. She presents a complete person, not just the kind of character we can root for in an on-the-run movie. Put simply, what this film asks of its lead would not have worked with an actor who couldn’t deliver onto the screen a real, flawed, complex, and simultaneously determined and overwhelmed person.

Arinze Kene as Cal and Marsha Stephanie Blake as Teri both stand out, and establish complex characters with often unspoken histories despite each only getting part of the film to shine. To go into their roles too deeply would be to introduce spoilers. Both characters are Black, and there is a sense of the two living in different worlds from Jean, with different levels of access and privilege, and different assumptions about their trustworthiness.

One of the major complaints I’ve seen leveled at “I’m Your Woman” is that you don’t always see the action. This isn’t a film about make-believe glory built around gunfights or mob intrigue. It’s a movie about a woman trying to keep herself, a baby, and a few other people alive despite the mob being after them. She hides, or runs, or walks away because it’ll keep her part of the crowd. There’s an intensity here that’s different from an action scene because the consequences feel more realistic. The horror isn’t that we’ll see something terrible on screen. The horror is that it will happen anyway, and we won’t see it, that this is a world like ours where it can easily be lied away or paid away or disappeared so that everyone agrees it never even happened.

This makes the spillover of those gunfights far more terrifying than if we’d actually seen them. We don’t know what happened. We don’t know what precisely the crowd is running from. We don’t know how much danger is on the other side of a phone booth wall, or two houses down, or in the approaching car on the horizon. When you have to protect people, the idea that you can’t even assess what you’re protecting them from is far more terrifying than just about anything else. “I’m Your Woman” intrinsically understands this. It is built from it, and it excels in presenting it.

The film as a whole has stunning moments of direction, cinematography, art direction, and performance. There are sequences that build a sense of impending dread like few films can. At the same time, a few transitions are overused and can sometimes crack the immersion just a bit. If it was a lesser film, that might not be as much of a problem. That it’s a perfect film in so many places makes its imperfections more glaring yet also pretty easy to move past.

Early in Jean’s flight, she’s set up in a new house. The way the house is shot results in straight lines being bowed ever so slightly. It’s visually unnerving in a way that’s extremely subtle, that removes a visual anchor we typically rely on. It also constantly frames Jean as trapped. It balances montages of Jean’s experience there with brief dialogue scenes that should reassure but instead unnerve.

Combined with the art direction and story choices, the film’s sense of paranoia escalates to an unbelievable level. They add up to an experience where you’re holding your breath waiting for everything to dive toward chaos. What happens in this act of the story is filmmaking that sears into your mind.

Later in the film, the cinematography and art direction remain stellar, but those montage sequences become overused. When the dialogue is as sparse as it is here, that means we over-focus on the details. A line of dialogue we’ve heard in this genre before stands out in a way it shouldn’t. Make-up and hair that’s a little too perfect in a situation where the character is alone without resources becomes apparent. We begin to want to see the character in the scenes the montage is presenting, rather than zipping by them. We can also feel a bit more distant from the character than we’d like to be.

It’s a minor gripe – the montages are well done, and the deliberate pace that forms the film’s intensity is maintained. The attention to period authenticity, detail, and the edging-up-your-spine storytelling is superb; the reliance on montages just makes me miss a certain interstitial kind of scene where we’re able to feel a little bit closer to the characters. There are some of those scenes there; the balance just leans a bit too heavily toward montages tying the storytelling together.

If I’m focusing on this a bit much, it’s not because it ruins the film. Like I said, it’s pretty easy to get over. Some viewers may not even be bothered by this element as much as others. I’m focusing on it because “I’m Your Woman” is so close to being one of the best movies of its generation. This slight unevenness makes it “only” one of the best movies of the year. It’s still often transcendent, and an easy recommendation.

I also want to mention the music. I’m not even talking about the soundtrack, full of 70s songs that set the scene or ironically contrast strange moments in Jean’s flight. I’m talking about the score by Aska Matsumiya. It centers on a tentative jazz piano being descended upon by every other instrument in the ensemble. It’s slowed and dragged by droning tones. Low string hits lurk in ambush. That piano is hunted, and in those cautious moments where it’s tempted toward hope, it hurries in panic and pauses in fear. Where a note lingers too long, it might get found and de-tuned.

It amounts to fewer minutes than you might find in most film scores because the soundtrack of songs is also so important, but I don’t care – it is the best score I’ve heard yet this year. It so fully and thoroughly describes the film as it happens, it so completely elevates the off-center tone and sense of lurking dread through musical suggestion, and few scores ever do this so well.

Yes. That said, this one gets complex. Given that men put them in this situation, and that their plans are informed by men who are more directly involved in the mob’s chaos than they are, it’s difficult for them not to talk about men. Additionally, they can’t be sure that the information they’ve gotten from these men is accurate, since they acknowledge that men they’ve loved lie to them about these things all the time.

In other words, the bulk of their conversation is about men, but it largely revolves around the risks and life-threatening positions men have put them in.

I do think of “I’m Your Woman” as a feminist and anti-racist film, but one that builds off of this foundation through its premise, storytelling, and perspectives rather than one that directly engages and addresses particular social issues in depth.

You can watch “I’m Your Woman” on Amazon with a subscription.