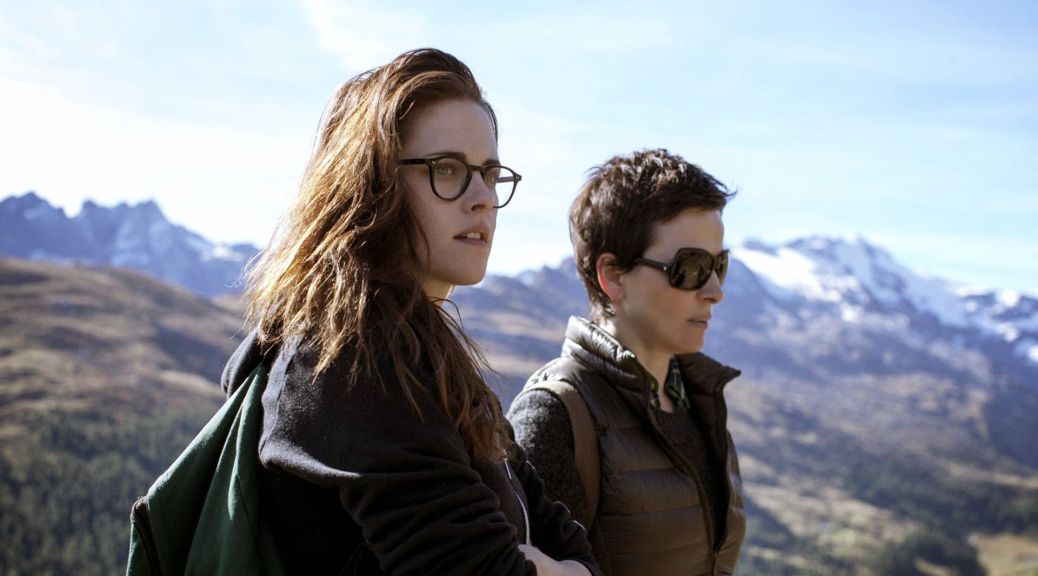 “Clouds of Sils Maria” feels like a captivating play, which is appropriate because it’s about aging actress Maria Enders (Juliette Binoche) taking on an incredibly challenging play. The role that introduced her to the world was the ingenue Sigrid, a young manipulator who sends an older woman reeling toward suicide.

Now, Maria returns to play the older woman, Helena. How does this fit into her life, with her own divorce, and the fresh death of the man who wrote the play and originally cast her? Her closest friend is her young assistant, Valentine (Kristen Stewart). They read the parts, discuss the play, hike the Alps.

“Clouds of Sils Maria” isn’t really a movie about what happens to its characters, it’s a movie about what’s thought by its characters as the world turns around them. It’s a movie about acting, aging, maturity and immaturity, layers of meta-commentary, the generational evolution of taste, the clash of perspectives that creates, the boundaries where socializing and social media meet. It’s a film of interplay between two people who love each other and work together and act together, and increasingly don’t know where those lines begin and end.

There’s a melancholy to the film, yet also a pleasure to its performance. It doesn’t uplift so much as it insists that life is a continued resurgence. It’s a chamber drama, but one of the best in recent years. In my book, Binoche gave the best performance of last year and Stewart wasn’t far behind.

There are some moods in which you don’t want to watch a think-piece, yet “Clouds of Sils Maria” has a natural quality that transcends this. It’s a complex film easily accessed, captivating in the same ways a play can be – it relies on its writing and acting, and doesn’t get in the way of those things. There’s a feeling of being in the theater while watching it, despite its number of locations and outdoor interludes. There’s a feeling that you should applaud in the end and step out into the warm night to compare it to other plays, to meet the actors backstage afterward and hear the particular foibles of the show that night.

In that way, “Clouds of Sils Maria” feels like a very private experience as a film. I wonder if I come back to watch another night, what inflection Binoche might do differently, what timing Stewart might adjust. It wouldn’t surprise me. Some films feel like you can leave their worlds and the characters will still exist without you. “Clouds of Sils Maria” feels like you can leave its world, and the actors will still be running their performances. It doesn’t make the film feel less real, it just makes you aware of all the levels on which it can be real. It’s a rare feeling that makes this a unique and special film.

Images are from The Amherst Student and IMDB.