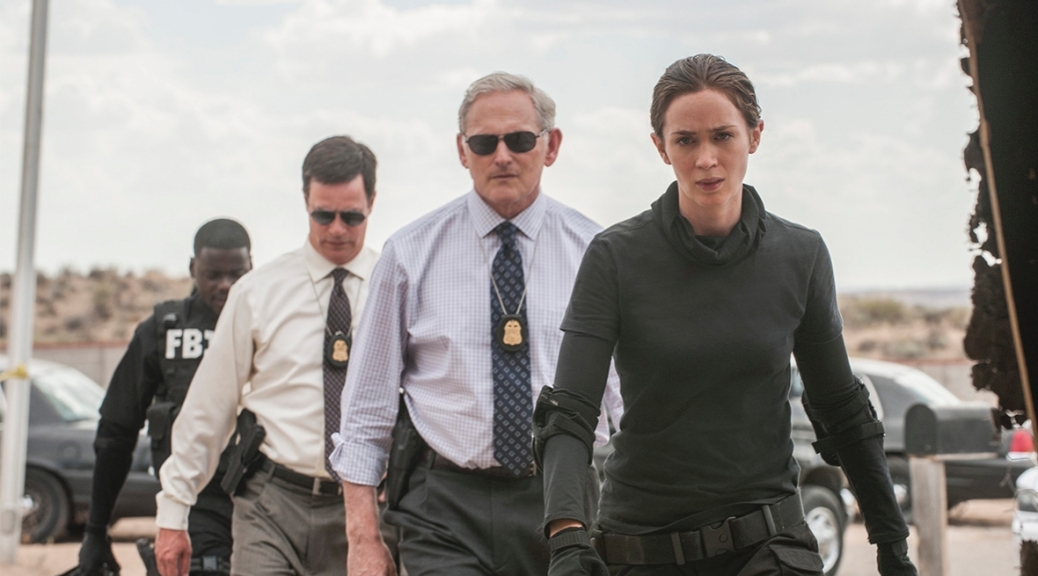 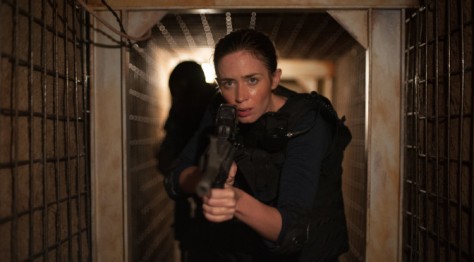 A pulsing, foreboding sense of threat. A festering thought you can’t quite pin down, that you know will come back to bite you. Realizations of something sickening and bad you’ve gotten yourself into. “Sicario” is all these things and more. It’s a rare thriller of powerful patience and primal rhythm. It will hook you and keep you strung out so far along its line that you’ll never see where you’re being taken until it’s too late.

Kate Macer (Emily Blunt) leads a SWAT team for the FBI. After her team suffers losses due to an IED planted in an Arizona home, she’s recruited by an adviser to the Department of Justice. They’re going after the leader of one of Mexico’s largest drug cartels. It becomes quickly apparent that she can’t trust this adviser, Matt Graver (Josh Brolin). Is he CIA? Something else? How legal is their operation? Why is she along when her only purpose seems to be getting babysat? Incursions into Mexico, highway firefights, desperate struggles, and hidden politics throw Kate back and forth as she grows increasingly suspicious of the mission for which she’s volunteered.

You will feel terrible for Kate. She’s risking her life for something idealistic and she’s pulled from that into doing something that only contributes to elongating the cycle of violence she’s trying to stop. She’s a warrior fighting for her ideals in a war that never had any to start. She becomes a victim of what’s expedient, what pushes the problem down the line for someone else.

“Sicario” is a vicious movie. It’s not overly gritty. It’s very distanced and removed at points, making you care for Kate by holding you back from her. This only adds to the film’s viciousness. There’s little release, and yet there’s a primal energy pulsing through it all. Director Denis Villeneuve (“Prisoners”) is a master of the slow burn, of waiting for the other shoe to drop. He utilizes exacting yet heartfelt detail in every scene. How light plays off Kate’s face, the rhythms of editing, when to cut to an actor’s tic all contribute to shaping for us the worlds of other people’s lives.

Here, he’s created something ugly and threatening, yet there’s so much attention to the details and texture of each moment. There’s the contrast of the looming clouds. There’s the sand as colored by the light of the morning. Even different forms of night vision are used at one point to evoke something otherworldly, as if descending into Hell itself. There are beautiful moments even amid such viciousness. The characters don’t notice, but it’s impossible as a viewer to avoid them. Minor details embrace the feeling of the moment in contrast to the over-arching, cold, dispassionate reality of it. 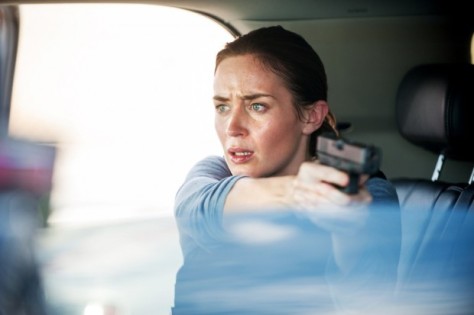 The entire ensemble follows suit. Brolin is grimy, hard to pin down, some evolved form of the most easygoing yet manipulative characters he’s played. Benicio Del Toro plays Alejandro, who – well, you’re not really meant to be sure who he is. Daniel Kaluuya is Kate’s SWAT partner Reggie, loyal to a fault. Theirs is a compelling and very real friendship.

The musical score by Johann Johannsson contributes incredible tension. It plays its most intense moments as muted, far off. It’s like hearing a hunting party beyond a hill, or relentless drums around the bend, their reverberation growing louder than the sound itself, sudden silences creating more anticipation than relief.

This is a film that plants itself in your head and simmers there. It gives you consequences and then lurks. “No Country for Old Men.” “Zero Dark Thirty.” “Traffic.” The list of films that resemble “Sicario” is a list of tonal high points in cinema, and yet none of them fully captures quite what “Sicario” is. If there’s a movie it reminds me of most, it’s “Silence of the Lambs.” It’s patient in closing its trap. It presents the treatment of a sole woman amid a group of men in particular and subtle ways. Nothing’s ever said out loud, but a moment of derision, being made to feel extraneous to the moment, and certain visual cues all combine to make a point of her treatment.

In its own way, “Sicario” would fit right into gothic horror. It’s trappings are as far away from the genre as you could get – sand, cigarettes, and assault rifles. Yet at the same time, the madness of how our drug war has evolved, fighting the very monsters we propagate – there’s nothing more gothic in theme.

That’s where “Sicario” gets you. It’s not the threat to Kate’s life that is most compelling. It’s the threat to the idea that Kate’s life matters. The notion that it doesn’t, that what she does with it, that what truth she chooses to hold is inconsequential…that’s why “Sicario” is such a vicious thing. These are ideas that can be vicious without ever making themselves apparent. They just wear you down. And “Sicario” presents this masterfully. It is easily in the conversation for Film of the Year.

1. Does “Sicario” have more than one woman in it?

Not really. Kate is played by Emily Blunt. There are two other women who feature in moments, but neither speaks a line.

Emily Blunt easily owns more screen time than any other character. She is, essentially, the only main character. “Sicario” feels like a Greek hero myth gone terribly wrong. Her being one of a kind, an outsider in another world, is the entire point. In some of the same ways “Silence of the Lambs” visually laid into the treatment of a professional woman in a field of men, “Sicario” uses specific actions to isolate Kate amid the men with whom she works. It’s not always comfortable. In fact, “Silence of the Lambs” is a bit of an upper compared to “Sicario.” Kate’s partner, Reggie, is the only black character. That’s no mistake either.

Normally, I’d criticize a film for making decisions to isolate women or black characters in such a way without stating a clear message as to why, yet “Sicario” is undeniably aware of these two characters, making a point of their treatment without ever saying it aloud. The isolation itself is a commentary. The violence other characters are willing to let Kate suffer is a commentary. “Sicario” reveals itself to be angry about very specific things later on, but to describe them would enter spoiler territory.

Kate and Reggie are, essentially, our only two good characters, the only ones who stay true and heroic. Kate dominates the story. Sometimes she is tough. Sometimes she comes out on the losing end anyway. This is the story of a hero meeting something that can’t be beaten, not because of her shortcomings but because of everyone else’s. If she can’t beat it, no one can. She’s a role model and a hero, but she’s also alone.

Again, take this with a grain of salt. I am a man. It would not be the first time I let a film off more lightly in this section than I should. With certain films, it can be difficult to balance my reading of it against its feminist qualities. If I always knew which films those were, then it wouldn’t be so difficult. I come with my own subjective limitations, though I do my best. This section is never meant to present me as an expert in feminism. It’s meant to do something that critics should be doing more often, but aren’t. It’s meant to provide a place to discuss these things, not decide them altogether.

I feel “Sicario” uses Kate’s isolation and the visual language inherent to certain moments of violence directed against her to consciously acknowledge and portray an aspect of the difficulty she faces: as a woman in a field where the men around her dismiss her usefulness. I could be wrong on that point. It could instead use those elements as shortcuts. I may let the bias of how good I feel “Sicario” is influence my reading of those elements.

I left the film considering Kate the kind of hero who would make it far as the protagonist in 1970s cinema, as a beset outsider trying to ferret out a truth. Others may feel differently about her treatment and they wouldn’t necessarily be wrong.

That may or may not be helpful, but something that critics need to do more often and something that men in particular need to be open to doing is admitting when we just don’t know something, even in our field. When some aspect of a particular film lies outside my realm of knowledge or expertise, I will tell you how I feel, what my inclinations are, but the most honest thing I can couch that in is, “I don’t know.”

“Sicario” is challenging. It will be a film I think about and pick apart for a long time. I may write about more realizations down the road. As of this moment, whether it’s feminist or not – the best answer I can give is: I think so, but in such particular, subtle, and experiential ways that I might be misreading it. If those ways translate through the experiences of a woman, then as a man, I’m not the best qualified to assess them. Sometimes that happens. As a critic, it’s not my job to give you my best guess when an aspect of a film reaches outside my realm. It’s my job to recognize what’s in and out of my realm, to give you my best guess knowing that, and to be clear to you about what qualifications I both possess and lack in making that assessment. “Sicario” reaches outside my realm in certain ways, and it drives me to understand those ways better.

Where did we get our amazing images? The last shot of Emily Blunt, in the car, is from The Film Stage’s article 8 Films to Watch Before Sicario. They have some very good recommendations. The feature and top images are from Fox Force Five News’ review of “Sicario.”