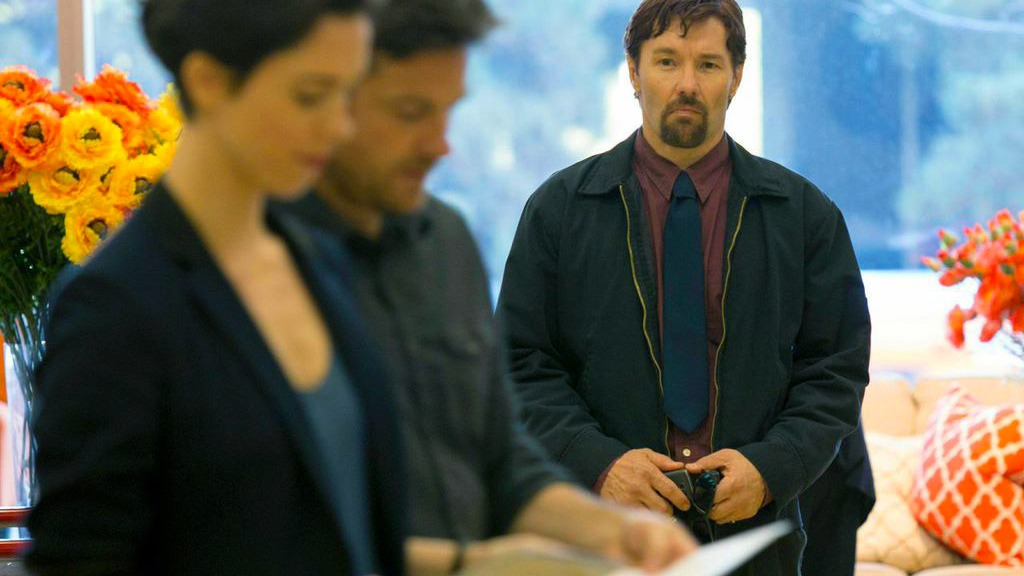 The big story of the weekend is that you should avoid the Fantastic Four reboot at all costs, but what should you see instead? Consider psychological thriller The Gift.

Its premise seems familiar on the surface. Simon (Jason Bateman) and Robyn (Rebecca Hall) move to California, close to where he grew up. An awkward former classmate of Simon’s, named Gordo (Joel Edgerton), thrusts himself into their lives with a cloying and creepy attachment. One thing leads to another, and pretty soon Simon and Robyn are terrified by Gordo. Yet The Gift holds more secrets than your average Cape Fear knockoff. It’s a tightly wound thriller of well-paced deceptions and reveals that holds moments of real fright and disturbing vengeance.

The Gift works so very well because control over its plot evolves from one act to the next. Doing this in a spoiler-free way, during the first act, Simon is making the decisions. He’s the one who guides the direction of the story. The most important element is also the most subtle: Robyn acts out of a need to fill many of the expected roles of a wife to Simon. Yet the viewer can catch blink-and-you’ll-miss-them instances that point toward Simon bullying her. He feeds her those expectations and controls her through them. She’s restless, but she doesn’t know why.

The second act is entirely Robyn’s, and it’s the most compelling. She’s paranoid and trapped in her own home, but it’s not just because of Gordo – it’s also because of the subtle pressures Simon exerts over her life. She confronts her own doubts and begins to uncover hidden truths about Simon as well.

I’ll refrain from divulging anything about the third act except to say it’s all about Gordo realizing his control. This makes for a disturbing ending that doesn’t play to any familiar expectations. The final twist is not one that you’ll guess. That’s a rare feat in cinema.

Its twist is clever because it’s right in front of you the whole time, but it’s also a jolt. Suddenly, the film is making the viewer do the work, hiding answers and forcing the viewer to create their own from whichever truth they decide to put faith in. Since most of the film is about revealing truth and getting closer to being whole, the film gives you an option of what to believe in the end. Is it a story of physical brutality, or psychological manipulation, or of discovering freedom? Only Ex Machina this year has created such a complex and challenging ending, although Ex Machina was much clearer on what homework exactly it wants the audience to take home.

Here’s where the audience will split. For those expecting a more traditional horror movie, a deliberate slow burner might not possess the right kind of big events. There’s creep factor to The Gift, and two of the most effective jump scares I’ve experienced, but this is squarely in psychological thriller territory, not pure horror.

For those wanting a psychological suspense piece with a lot of character, this is your film. It gets inside your head very well, and it keeps you guessing throughout. Its ideas are disturbing and play off the paranoid inferences our own minds start creating everywhere.

All three leads deliver superb performances. Bateman is most famous for Arrested Development, but he shows a skill for subtlety and misdirection here I didn’t expect. He has a scene two-thirds through the film that is perhaps the best moment of his career. Rebecca Hall (The Town) powers through films and has a knack for characters who feel real and accessible. Her role is quieter yet more demanding than the two men. Edgerton (Ramses in Exodus: Gods and Kings) also wrote and directed the film. You can see why he cast himself as Gordo. He’s note perfect, making a small role cast a large and toxic shadow across the rest of the film.

The three fuse and play off each other exceedingly well. Explaining the talent each actor displays on their own doesn’t quite express the devious synergy at play between them. It’s a perfect trio for this kind of film, each one charming, guarded, and needy in turn, one pulling for something the minute another pushes.

One day, The Gift will make a vicious double-feature with Gone Girl. Re-watching the trailer, I’m also impressed that half the things you’re about to see are red herrings:

Does The Gift have more than one woman in it?

Do they talk to each other?

About something other than a man?

This clearly and easily passes the Bechdel Test. It’s also interesting because so much of what Robyn speaks to her friends about results from the subtle pressures Simon puts on her to fulfill the stereotypical role of a wife. Robyn says she wants to have a family, and she feels it in a removed way, but you never get the idea that she’s made the decision about it. It’s what she wants because Simon puts pressure on her to want it.

The movie’s acts are broken up by scenes of Robyn jogging, yet this seems less for her than it does as a way of releasing something she can’t understand or deal with herself. In fact, the only times she seems to be herself are when she’s around Gordo. She objects to Simon shutting Gordo out of their lives completely, but she allows Simon to bully both her and Gordo into acquiescing to his desires.

It creates a dynamic where Robyn is concerned with stereotypical gender roles not as a self-fulfilling desire, but rather as one that fulfills Simon. Part of the reason why the ending is troublesome on the surface is because Robyn is turned into something to be possessed in the third act. Of course, this isn’t the movie’s commentary on women – it’s a commentary on how Simon views the world and how Gordo can punish Simon. It’s a commentary on men. That doesn’t change the fact that women might suffer in order to make that commentary.

It’s difficult and something of a slippery slope that will inspire a wide range of opinion, but I will say that The Gift finds a way to make many perceived realities into conjectures on the parts of different characters. You really can’t be sure walking out what does or doesn’t happen, or the degree to which someone did or didn’t suffer. In this way, The Gift has its cake and eats it, too.

The implications of all this are right there on-screen, so even if it’s cruel, it’s cruel in order to call out the toxic masculinity that Jason Bateman’s Simon exhibits. Counter-programming Bateman and Edgerton into roles that might make more sense with the casting reversed also serves to exhibit how that toxic masculinity can hide itself in many forms, not just the obvious mustache-twirling, evil villain, film versions. In many ways, The Gift lets you decide just how cruel you want its truth to be, and it forces you into a place where deciding either way is a form of cruelty on the part of the viewer. Do you want to believe in violent, paranoid cruelty or everyday, mundane cruelty?

For that, it relies on Rebecca Hall to thread a needle in a performance that will not be praised as much as Bateman’s and Edgerton’s skilled-yet-showier roles. Hall’s performance offers a third argument: the rejection of both forms of cruelty. In the end, what you walk out of the theater believing may belie your own presumptions and those presumptions that are reinforced by storytelling themes that are repeated in other media ad nauseum. That’s where the genius of The Gift lies, in all senses of the term.

Most will walk out seeing it from Simon’s or Gordo’s perspective, believing in one or the other’s presented truths. To believe in either is to put your faith in victimizers who simply operate on flip-sides of the same coin. Some will walk out recognizing a third route in Robyn’s, a conclusion that must rely on one or the other of the male truths, yet that still exists as its own reality going forward.

The Gift doesn’t say all this or handle it as perfectly as it could – it’s a clear notch below movies like Ex Machina and Gone Girl in how expertly it throws the audience between different perspectives. Yet it does have its own unique way of forcing the audience into a corner, of making us take the homework of thinking and thinking and thinking about it home with us in a way few movies do. That rarity is something special, and it’s unique in many ways to, as David Fincher once put it, “Movies that scar.”

The Gift is very unfair, and that’s the point. It’s left to the audience to decide just how fair its reality is, and how fair everything is after the credits roll, both in the movie’s world and in our own.

Where did we get our awesome images? The featured image is from Entertainment Weekly’s brief review. The 2 in-article images are from Vanity Fair’s interview with Rebecca Hall.