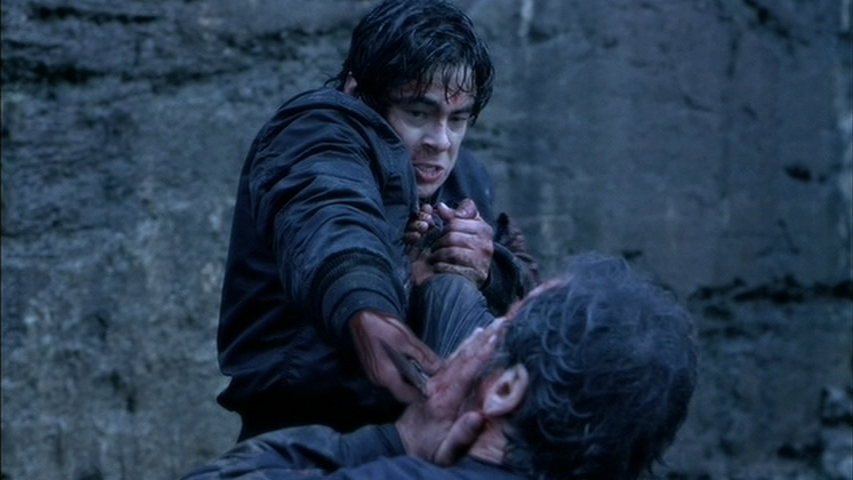 The video I’m featuring today is not currently embedding properly. Please watch it on YouTube here.

The only reason Liam Neeson still has an action career is because no one’s employed Tommy Lee Jones to chase him down yet. You could run a day-long marathon of films featuring Jones chasing down fugitives from the law: The Fugitive, sequel U.S. Marshals, two Men in Black movies, The Hunted, The Missing, No Country for Old Men, and In the Valley of Elah.

What’s most impressive about that list is that all these movies are good to great, and you can see Jones becoming a more dynamic and human actor as he ages (In the Valley of Elah may be his finest single performance).

The plot of The Hunted is fairly basic – Benicio Del Toro plays Hallam, a special forces operative convinced that the government is trying to kill him for what he knows about secret operations. He hides out in the lush forests of the Pacific Northwest and begins murdering anyone who comes near, including a pair of hunters. This brings the FBI in, who realize they’re outmatched and recruit the man who trained Hallam (Jones’s Bonham) to help track him down.

The Hunted is the least of Jones’s tracker films, still worth watching but surprising in its traditional structure since it comes from director William Friedkin (The Exorcist, Sorceror). Yet it’s also the movie where Jones finally got to throw down in extended fight scenes and take on his fugitive one-on-one. The knife fight above is absolutely brutal, and one of the better ones ever put to film.

This training sequence from earlier in the film helps describe the kind of fight choreography we’ll see later on. It provides emotional background on Hallam, but also acts as a primer to make sure we’ll keep up with what each fighter’s trying to do in the later fight:

The climactic fight does have its weak points, though. As you watch Jones tumble down a waterfall, you’ll realize just how far visual effects have come in 12 years. In terms of the choreography, filmmaking in the 1990s and early 2000s demanded egregious pauses in combat for reaction shots, as well as close-ups of hits and misses. Action films since then, in great part due to the success of The Bourne trilogy, have shifted further toward uninterrupted combat in the service of reality. Since we’ve also drifted away from having reliable action heroes like Arnold Schwarzenegger and Sylvester Stallone, reaction shots and close-ups have evaporated and audiences are trusted to keep up without these breaks.

Additionally, where exertion used to be stressed in our violence, we now focus on the mechanical aspects of it, often to the exclusion of emotion. Neither of these portrayals is particularly accurate, and the idea that there’s a best “type” of fighter or a superior “attitude” to possess is a gross oversimplification.

These shifts in the tone of our fight scenes reflect more what’s popular in the portrayal of action; they reflect changing tastes in filmmaking. Fight sequences that feel more realistic aren’t always actually more realistic. Just as pausing in combat demanded sacrifice in the mechanics of the action 12 years ago, a purely mechanical scene demands sacrifices in the thought and emotion that takes place in a real fight. It’s important to remember that each approach sacrifices an aspect of reality when we discuss fight choreography and how action scenes are filmed.

By the way, we selected yesterday the Best Fight Choreography of 2014 and the Best Stuntwork of 2014. If you haven’t yet, check them out.