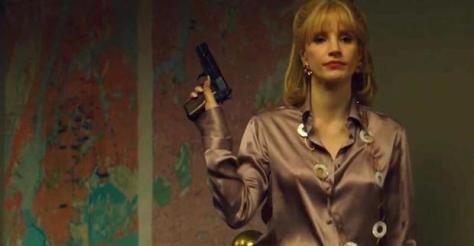 A Most Violent Year follows a virtuous man in a time of thieves and gangsters. Its style recalls 70s crime films like The Godfather and The French Connection.

Oscar Isaac plays Abel Morales, an immigrant in New York City who’s trying to expand his successful heating oil business. It’s 1981 and his fuel trucks are being hijacked at toll booths and on-ramps, his drivers beaten and left barely breathing in the middle of the road. His competitors, who are either gangsters or rely on gangsters, want to put him out of business.

What’s an honest businessman to do? Most modern Hollywood films would see him pick up a gun and start getting even. In the style of those 70s crime dramas, however, Abel chooses to respond to this as a businessman first. He knows arming his drivers will result in shoot-outs and all-out war. He knows staying the course will be more difficult and more painful, but he has a vision.

His wife, Anna (Jessica Chastain), is the daughter of a gangster, the one from whom Abel bought the company. She constantly threatens Abel that if he won’t rise to his aggressors, then she will. You’re given the feeling that she could end all this in one vicious heartbeat: a street war or a bloodbath. That’s not what Abel wants. He’s dedicated to taking the high road and earning his victory by outmaneuvering his opponents. And yet he trusts Anna enough that when she hides the ledgers from investigating police, he sits hidden along with them.

Avoiding the violence in which everyone else partakes doesn’t mean the film is void of action and tense sequences. A Most Violent Year features a shoot-out and the best chase scene of the year, involving cars, trains, and a plain old footrace. There are strong shades of Dustin Hoffman classic The Marathon Man in these moments.

All that’s not to say that A Most Violent Year quite lives up to these films, but being a half-step away from greatness still means you’re very, very good.

It also carries a deliciously mixed message. Abel’s shadow is a gang lawyer named Andrew, played perfectly by Albert Brooks. While Abel’s marriage to Anna is contentious at times, his business marriage to Andrew is all too perfect. These two figures, Anna cooking the books on one end, Andrew treating Abel on a need-to-know basis on the other, means that Abel can take the honest and virtuous path, but only so long as he enables and ignores the actions of partners who don’t.

It offers a theory on American business that may not be popular, but is in keeping with the gang and crime movies of the 70s: that cheating is part of the game, that being an honest success is very possible, but it may require you to ignore all the dishonest things that have allowed your success. It may require you to sacrifice some of the people who worked so hard to get you there.

A Most Violent Year contains tragedy, but it doesn’t treat this concept as tragic, just inevitable. It leaves the viewer to pick up the pieces and draw his or her own conclusions. In that way, it’s a chilling portrayal of American business politics. I wouldn’t call its treatment especially conservative or liberal either. It has a strong enough story that it doesn’t need to make political metaphors. In fact, it’s thankfully drained of these, relying on its ideas, tension, and superb acting to play out the concepts according to the rules of this 1981 New York City we’re given.

The ensemble also includes David Oyelowo (Dr. Martin Luther King in Selma) as a District Attorney investigating Abel. Elyes Gabel is emotionally resonant as a driver whose truck is hijacked.

A Most Violent Year is a film that got overlooked at the Oscar nominations, not as Best Film, but certainly for its acting and writing successes. All its tension comes from not knowing what’s going to happen next, how characters will respond to the larger story and to each other. So many movies follow the same structures these days that being this “in the dark” as a story progresses is a refreshing reminder of one of classic cinema’s strengths. A Most Violent Year is able to feel tense by slowing down and making you think and learn about its characters.

1. Does A Most Violent Year have more than one woman in it?

This question is dependent on question 2, which it doesn’t pass, but when women do speak, it’s about business or escalating conflict. It’s always directed to men, but it’s never about men.

The Bechdel Test is a tool, not a hard and fast guide to a film’s worth. They could have featured more women – I’m not about to excuse it for that. The women they do feature, however, are all capable professionals. The dynamic between Abel and Anna is fascinating. In some ways, he’s the “rock” of the family only because Anna has decided he’s better suited to that guise.

They are both willful characters, but you get the sense he has no real control over her. Oscar Isaac might dress the part of The Godfather‘s Michael Corleone, but it’s Chastain who’s the real threat. Anna contains herself not because Abel makes her, but rather because you get the sense the conclusion is never in doubt for her. She is patient with him and it’s revealed in clever ways that, no matter how capable Abel is, he is in many ways her Lieutenant and not the other way around. It’s an important difference that manages to avoid the old Lady Macbeth route.

The Lady Macbeth route means that he’s powerful and she knows how to manipulate that power. It can be done well, but it’s all too often abused on film. Not so here – Anna is the more powerful, but she restrains herself because Abel is the more legitimate face for the business. There are moments where she seizes that power from him in other parts of their lives, and when she gives it back it isn’t because she’s a wilting flower, it’s because she’s done with the moment. She’s patient, and you get the sense her Plan B is so violent and terrifying that she can afford that patience.

The tagline for the movie doesn’t exactly roll off the tongue: “The result is never in question, just the path you take to get there.”

The fork in the road is the very definition of Abel and Anna’s marriage and business partnership. His path speaks to the struggles of legitimacy in a world that devalues such things. Her path speaks to doing what needs to be done, no matter the price. And yet, that marriage works because she could win every battle between the two, but relents on enough of them to allow him his continued belief in legitimacy and honesty. And, in that way, she is one of the most powerful characters on film this year.

A Most Violent Year could have done better on the Bechdel Test without changing the course of the rest of the film, but it does give us one of the most interesting, confident, and dynamic women of any film from 2014.