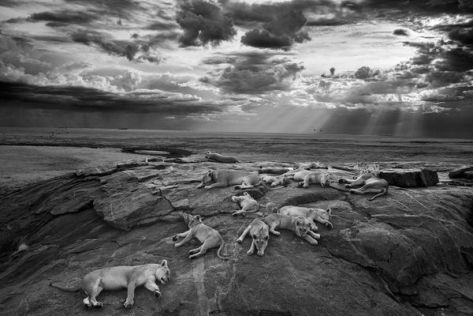 National Geographic announced their award for the year’s best wildlife photograph, seen above. It’s called “The Last Great Picture.” It isn’t called that because of photographer Michael Nichols’ ego. He’s fought to raise funds and establish 13 new national parks in lion territory. It’s called “The Last Great Picture” because pictures like these may no longer be possible in coming decades. The Serengeti, like so many natural wonders, becomes lesser every year.

Wildlife Photojournalist of the Year is Brent Stirton. National Geographic combines his award-winning photographs with Nichols’ to create a breathtaking photo series on lions and the strange culture that’s grown around their protection:

“Canned” lion hunts, in which trophy hunters pay for the chance to shoot a lion (and in which professional guides stand by to shoot in case the hunter misses) help raise funds for environmental protection. Is the cost worth it, sacrificing one species as a commodity to save the others in danger?

Local Sakuma dancers kill lions only if they threaten their villages or livestock, but they collect tribute for killing lions by going from village to village and dancing the story of their kill. This glorifies the killing, but for the Sakuma, three or more years of this dancing is required after killing a lion to keep from going mad. Meanwhile, Maasai “Lion Guardians” dedicate their entire lives to tracking and protecting the misunderstood predators.

Then there’s the mad photographers taking pictures of it all.

Finally, a lighter note: Nat Geo features Tim Laman’s portfolio: photographing all 39 species of bird of paradise. No one else has ever done this, because the feat took Laman 10 years of dedication to complete.

If you haven’t already, go check out the stunning photo-essay.