“Screw the inevitable vampire outbreak, let me explain my divorce proceeding to you one more time.” This isn’t a direct quote, but it covers close to half the run time of The Strain‘s two hour premier. There’s a certain thinking in TV drama that vampire outbreaks and murder and planes full of people dying and zombie thralls and worms that eat their way through your eyeballs just aren’t interesting enough unless the main character explains his broken family life to everyone he encounters.

Yes, it’s important to establish your protagonist has a life before his first episode, but just maybe we could hear a bit about the supervampire’s family life, or the ancient vampire hunter’s family life, or – I don’t know, crazy thought here – the plane full of 200 dead people you’re supposed to be investigating instead of telling random passersby about your divorce proceeding.

The Strain is based on a series of novels horror maestro Guillermo del Toro co-wrote with Chuck Hogan. Now, FX’s original programming has been consistently inventive and off-kilter. Nip/Tuck, The Shield, and Sons of Anarchy were long the network’s flagships, now replaced by American Horror Story, Justified, and the Peabody-winning The Bridge. FX has also made a habit of dissecting and lampooning the male gaze in comedies like It’s Always Sunny in Philadelphia, Louie, and Archer. This year’s Fargo has made the network’s biggest mark on the Emmys in years and, while I haven’t seen it, The Americans has been critically lauded and keeps Keri Russell employed, so I’m all in favor.

Yet FX wants a bigger piece of the cable pie, to go toe-to-toe with AMC (Breaking Bad, Mad Men, The Walking Dead), and this summer season’s shows have left us wanting. You can’t help but feel Tyrant is filmed on a series of L.A. backlots, which is all the more strange since it’s filmed in Israel, but strange filmmaking choices and subpar editing make it feel too precious to be taken realistically. 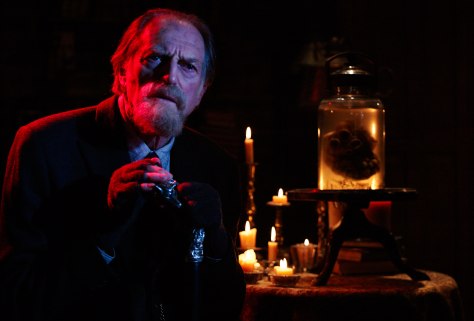 Which brings us back to The Strain, which FX has pushed hard. The show begins much like the pilot for Fringe, with a plane that stops responding mid-taxi on the runway: it’s gone dark, the pilots don’t respond, and all 200 passengers on board suddenly appear dead. Yet there’s none of Fringe‘s colorful, pop-art sensibility or whip-smart casting (let alone its quantum theosophy), and there’s none of the investigative, tone-poem build-up we once loved about The X-Files.

The Strain wants to be a procedural, or at least its pilot episode does, yet no procedures are followed. Characters do as they want, and not in a tongue-and-cheek, I’m-the-hero kind of way, but in a where’s-my-mark, what’s-my-line style that makes it seem like so many monkeys with typewriters submitted drafts and nobody bothered to check that it all fit together. The Strain‘s one-note mood of incredible self-seriousness means that it’d better have some logic or a damn good lead actor to fall back on. Instead: “let me explain my divorce proceeding to you one more time.”

The Strain is far more concerned with characters’ intersecting broken romances than with the 200 dead people on a plane, and its moments of gore – while splattery enough for a midnight feature – are so out-of-place that you wonder if the cat sat on the remote and accidentally switched you to Starz.

The main character, a CDC epidemiologist played by Corey Stoll, is named Ephram, or Eph for short. Every time someone addresses Eph, it sounds like they started to swear but suddenly remembered they’re on cable TV, where you can graphically smash a man’s head into cement pudding for a minute straight, but you’d better not cuss.

Few shows in history have so desperately needed a script supervisor. Before knowing how the disease spreads, Eph and his CDC crew inspect the plane’s unloaded cargo in plain clothes, using no precautions. Two scenes later, CDC personnel are sealing up that same cargo Eph and friends just ran their hands up and down, except now they’re using protective gear and contained breathers.

Even after the CDC establishes that the virus is passed on by disgusting, little, wormy things that crawl through your skin, they fail to warn the coroner, who’s autopsying all 200 infested dead bodies alone (because that seems like an efficient use of resources) and whose protective gear amounts to a pair of latex gloves. Instead of calling and saying, “Hey, there are these crazy wormy things that burrow through skin,” Eph wanders the airport, bringing his little box of highly contagious wormy things that just killed 200 people on a field trip to the security office, to the main concourse, to the parking lot, and waving them around as he talks to everyone in sight.

For its first few seasons, The X-Files could barely afford cameras or sets, but it made the world around us terrifying by giving its horrors consistent logic of their own, logic which gave every shadow down every hallway the possibility of hiding something vicious just waiting to be misunderstood. Consistency. Logic. It’s what good horror is built on. It’s why we don’t mind every X-Files takes place in an office building or a dark cave, and every Supernatural takes place in the same hotel room. Yet it’s what’s wholly missing from The Strain. Guillermo del Toro’s other work (Pan’s Labyrinth, The Devil’s Backbone) prides itself on these qualities, but he both co-wrote the teleplay and directed the pilot for The Strain, so the blame for this mess has to lie with him.

Furthermore, I don’t expect every TV show to get the procedure of federal agencies right, but if you’re going to house yourself in the structure of a bone dry procedural, then you shouldn’t be embarrassingly ill-researched. At the very least, if you’re just going to make it up, at least be consistent about those details you yourself create. Making it worse, The Strain‘s complete disregard for credibility is combined with a relentless humorlessness and misplaced character struggles – at one point, the 200 unexplained deaths, a missing vampire coffin, and wormy things run amuck are all sidelined so we can spend time on what’s really important: Eph’s very mild discomfort with public speaking. Lord knows why. He opens up to everyone else with, “Let me explain my divorce proceeding to you one more time.”

This gives way to the pilot episode’s worst scene, when Eph addresses the media and victims’ families. A grieving father charges him, slaps him across the face, and – despite security and police essentially hanging out of Eph’s pockets – the father turns around and monologues at length to the world media about how cheesily he misses his daughter. This dad explains he couldn’t care less if his daughter’s dead or not, but it’s unfair the CDC hasn’t released her body for a whole two hours. Talk about confused priorities. If he were evil, we could see a motive, but he’s not, so it doesn’t make any sense, let alone an emotional connection. It only makes one wonder how the hell such a scene got past…well, anyone involved.

Future episodes look like The Strain‘s dull faux-CDC shell might be cracked for some shiny vampire-bashing. This would require the show shifting more time to elderly vampire hunter Abraham (David Bradley), who gives the show a little cogent mystery, but is otherwise thoroughly wasted. I’ll give The Strain a second episode out of loyalty to del Toro, but this is by far the worst thing he’s directed. Any goodwill I had stocked to forgive the show any potential flaws has been completely tapped out. The Strain has some good set design at points, but that’s it. Everything else insults the viewer at the most fundamental levels of storytelling.