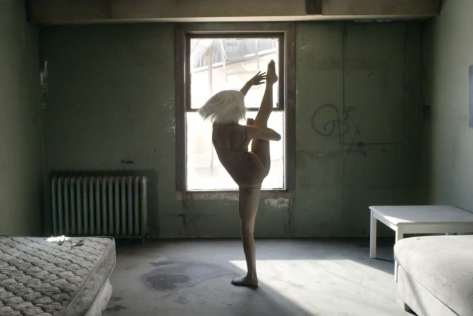 Vanessa here. I asked to do the intro today, because of what music videos mean to me. Music videos are the most watched form of short film. They come in all different flavors – performance videos of your favorite band, dance videos, comedies, dramas, experimental, arthouse. People say the musical’s dead, but it’s very much alive – billions of people across the world watch music videos every day. It’s our modern version of opera, touching narratives and social messages condensed into musical storytelling. And if you worry that speaks ill of our society, you’re watching the wrong music videos.

Our top 5 videos run the gamut – an animation with an ecological message, a socially conscious rap video, an angry social comment starring everybody’s favorite web-slinger, a tearjerking drama, and perhaps the most singular dance performance in recent music video history. But first, allow me to feature a personal favorite of mine.

This is what music videos mean to me. Here’s a little girl named Addy. She got stage IV cancer when she was just four years old. She went through chemo and radiation. What she says got her through it all is watching her favorite musicians on YouTube. The Make-A-Wish Foundation, a non-profit organization that grants dying children their one wish, was able to make a music video of Addy, thankfully after her recovery, performing Katy Perry’s “Roar.”

What do music videos mean to me? They mean a way to reach out into the world, across cultures, to perceive someone else’s story, their pain, their suffering, their success, five minutes at a time. Five minutes can change someone’s life, give them hope, and communicate the most urgent messages we have the capability to speak.

Music videos were Addy’s lifeblood, and she’s just one little girl. How many little girls, little boys, teenagers, men, women, those suffering pain, heartache or loss, find those five minutes that keep them going another day?

One of my co-writers, Cleopatra Parnell, wrote about Lykke Li’s “No Rest for the Wicked” (#20 in our countdown) that every country that wages war on a race, gender, religion, or lifestyle has a chance to show “whether we learned…or history repeats itself. The role of musicians and artists today is to be the conscience that refuses repetition.”

Music videos create a major part of our social consciousness now. They are our most readily accessible way to translate stories at no charge across cultures. That can save a lot of Addy’s. That can be a strong conscience that crosses borders. That can change lives. Enough changed lives can change entire cultures. And even if nothing else, at least they saved the lives of girls named Addy and Vanessa when they were unsure if they could make it another day.

Enjoy our top 5, and please keep watching and making every piece of art you can.

P.S. Due to music copyright law, you may have to click through to YouTube to watch certain videos.

This is quiet, lyrically animated. It’s a story repeated day after day in a world we care about in voice, but often refuse to take action to save. What’s it like to be the last, lone beast in the scraps of a ruined wilderness? You can run, you can leap, you can be gallant and noble and beautiful, but if something’s meant to die and no one’s there to witness you, what does your beauty and talent mean? One of the best animated music videos I’ve ever had the pleasure of seeing.   -Gabe Valdez

There’s a violence in day-to-day struggle more and more families are feeling. It’s not the obvious violence I see in movies about black gangsters and brown drug-dealers and white heroes. The violence is internal and families feel it against themselves. It’s the violence of disappointment and discouragement. When you realize you’re up against something bigger than yourself, the system’s stacked against you, and you can’t win, where else is violence supposed to turn but on yourself and your loved ones?   -S.L. Fevre

It shouldn’t matter anymore whether someone is gay. It shouldn’t get anyone beaten or killed. You would think those two statements are so obvious it would be stupid to write them. Yet we live in a world that’s wasting its time and resources on holding the LGBTQ community down when it wouldn’t make a damn difference to the world what that community does. So it’s still a big deal when Andrew Garfield stars as a transvestite in a major music video released two weeks after his role as Spider-Man in The Amazing Spider-Man 2.

But it’s not the old moment when we used to celebrate the specialness of someone’s difference. That moment now is angry – we look at the normalcy of someone’s difference, and instead feel despair and frustration at the violent holdouts who hold back a world that needs to get on with doing something more important than clinging to hate.   -Vanessa Tottle & Gabe Valdez

A young man sacrifices having any life of his own to take care of his grandfather. His grandfather’s nurse falls in love with him. Together, they steal the grandfather away to visit his childhood home. Things go wrong. And the rest of it is about coping, how to learn to rely on someone else, how to learn to give into moments you can’t control. It’s a trilogy of videos still reeling around in my head, being turned over this way and that to get ahold of the story from every angle. Each time I watch the trilogy, I find something new in it. The performances are dramatically sterling. By the third video, the mythical power of the trilogy is astounding. Watch it through. You won’t regret it.   -Gabe Valdez

This was a unanimous choice for #1. If you knew how much this group bickers about every little detail, that would blow your mind. None of us pretended anything else can be here, though, not even for a second. You don’t even need to understand why. You just need to watch “Chandelier.” The level of performance is what you get when you watch Jackie Chan or Mikhail Baryshnikov – less refined but at such a singular level nonetheless that it’s impossible to replicate or find a similar moment anywhere else you look. Maddie Ziegler shares dance solo at its finest, choreographed and performed by an 11-year-old. It’s the most unexpected music video.   -Vanessa Tottle

In any form of art there’s genius. You can’t point to what makes it up, but you know it when you see it. Maddie Ziegler’s choreography and dance here is feral, animal, chaotic, and yet so brilliantly nuanced – every move means something. She’s 11 and yet there’s a maturity that speaks to emotional moments and struggle and pushing forward despite being held back…there are times you think there’s a 30-year-old, weathered dance veteran on-screen. At the same time, there’s an immaturity, a free attitude and irreverence in the moves she’s chosen that reminds me of the experience of being a kid, of overcoming that sense of being overwhelmed in order to learn you can push your own boundaries. How she captures that, how an 11-year-old’s artistic discretion pulls from both ends of the spectrum to create and then perform a dance that speaks to you and sends chills up your spine…it’s an impossible performance, and yet there it is.   -Gabe Valdez