Here it is, our rundown of the top 35 music videos of 2014 (so far). Before anything else, I want to congratulate four friends of the blog for their music video accomplishments – Hayley Williams has helped us in the past and has my eternal thanks for her support. I can’t recommend Paramore’s video for “Ain’t It Fun” enough. The first version of the video was dropped, and even though the song represents a more adult direction for a band she had to reassemble overnight, this second video remembers to celebrate the enthusiasm that’s always run through her music.

On the other end of the musical spectrum, one of our writers today, S.L. Fevre, appeared in Machine Gun Kelly’s “Sail.” The man raps his guts out and put together a complex, charged music video.

Lara Hemingway did a bang-up job on the costume design for SVE’s glamorous and suggestive post-apocalypse video “Talking to the Walls.” Her work and the cinematography are my favorite parts of the vid.

Because of these personal relationships, we won’t be ranking the videos I just mentioned, but check them out to see some of the amazing places music videos are heading.

P.S. Because of music copyright law that still doesn’t get this whole Internet thing, we can only feature some videos here, but you can always click on each title to watch it directly on YouTube.

If dancers are not going to hit every step, they should at least feel every step so much the audience doesn’t notice. Kiesza is not the best dancer, but she feels the music and her atypical crew stands out. There are many little flaws in this single, four-and-a-half minute shot, but there’s so much feeling in it I really couldn’t care less.   -Vanessa Tottle

My vote put this one in. I fully expect to get in trouble here, but you know what? It’s colorful. It’s cute and cheerful and inconsequentially bubblegum. It’s so thoroughly B-movie that I wouldn’t be shocked to see Kiefer Sutherland waltz into the middle of it chewing scenery. Truth be told, there was a spot earlier in the year when this was on the heavy rotation I normally reserve for dance videos. Guilty pleasure? Absolutely. But as a guilty pleasure, it’s wickedly done, and its ridiculousness was put over the top when the Internet exploded with accusations of “Dark Horse” being Illuminati propaganda. That argument paled only in comparison to the debate as to whether Katy Perry is an Illuminati queen or simply a powerless peon. Because I guess even the Illuminati haven’t figured feminism out yet.   -Gabe Valdez

I cannot play the violin and Irish step dance at the same time. Lindsey Stirling can. She mixes a Celtic sensibility with the kind of complex hip-hop backdrops Emancipator have made their bread and butter, a dubstep percussion driving the whole thing insistently forward. As music videos go, there’s nothing particularly special about Stirling’s team-up with Halestorm frontwoman Lzzy Hale. Stirling’s been tearing up YouTube with her hip-hop stepdancing violinist performances for a few years now. “Shatter Me” stands out for some of its imagery, yes, particularly Stirling’s snowglobe figurine. What makes it really stand out, though, is the meeting of two dynamic and powerful female performers who’ve used the internet to carve the sorts of followings that even a few years ago weren’t available to women of their talents.   -Gabe Valdez 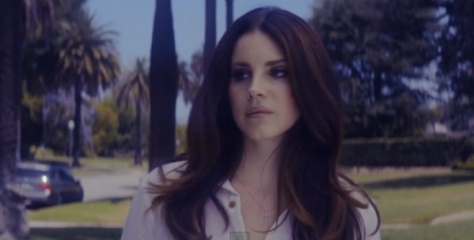 I wish the original cut of this had been released instead. I had a chance to see it and its message is much clearer. In the original cut, Lana Del Rey is murdered, presumably traded in for a younger model, but one philosophical comment about death in a magazine and Francis Bean Cobain is shoving herself into talented people’s business. So things got recut, or so the explanation goes. It still ends with Gatsby eyes over a David Lynch road. The message is clear: men still control a woman’s image, not just personally but through the media. Critics complain Lana Del Rey glamorizes a trophy girlfriend lifestyle instead of calling it out, but whether music critics are living vicariously or trolling for readers, they’re bigger purveyors of that lifestyle than musicians today. Lana’s a hero for a lot of people who work in L.A. and understand how much the dream factory huffs its own fumes. It won’t be the first time the new prophet gets dumped by the old religion.   -S.L. Fevre

This video has flash and creativity. By putting all its effects and angles in black-and-white, my eye’s constantly drawn somewhere new. If it was in color, it might be too ordinary. Watching human forms in front of shifting fractals hints at the out-of-body experience of performing. It also shadows the song’s use of bass refrains, combating synth loops, percussion fills, and vocal codettas.   -Cleopatra Parnell

I mean the lyric video (and not the horrifying music video that suggests anti-Semitism). Taking you on a tour of a bakery with every silly innuendo written on cakes and muffins makes the song more coy than it really is. Criticize her for terrible metaphors (“It’s time to bring out the big balloons”), but I enjoy a woman who can sing about sex as shamelessly as Whitesnake.   -Cleopatra Parnell

Performance videos are difficult. They have to blend simple ideas that don’t get in the way of the performers with visually arresting devices that differentiate your video of a band playing from everyone else’s. Sylvan Esso uses darkness and simple lines of color to meld the song’s steady bass line and evolving chorus. They use an accessible choreography that’s nonetheless interesting to look at. It keeps us visually interested, but in its simplicity it always refocuses us on the music. The brilliance is that this is a music video any of us could film tomorrow, but few can edit properly. There’s an expert visual rhythm here that’s always in service to the music itself, and that’s what makes this such a great video.   -Gabe Valdez

Essentially a big mash of GIF-ready imagery ready to go viral, M.I.A. fills a deceptively complex video full of 1984 references, “Drone Survival Guide” posters, 3-D printed assault rifles in toy gun colors, and more epilepsy triggers than that famous Pokemon episode where Pikachu sent children across Japan to the hospital. M.I.A. has been the most important cyberpunk musician working since her politically charged 2010 releases of Maya and Vicki Leekx. Hybridizing Britain’s punk imagery, Southeast Asia’s GIF montaging, India’s own habit for anachronistic iconography, and her own anti-Imperialist sensibilities, she’s making a play to become a crucial cyberpunk music video director, too. Aggressive, loud, colorful, bombastic, garish, and pissed as hell, it’s the purest music video reflection of M.I.A. as an artist that we’ve had yet.   -Gabe Valdez

Only in South Korea could f(x)’s new album, just a year off their award-winning Pink Tape, be referred to as a “comeback.” K-pop, or Korean pop, is known for upbeat tempos, flashy group numbers, simple choreography, and above all its amazing sense of schoolgirl-goth-glam fashion. f(x) is one of the guiltiest bands around – I don’t believe anyone expected their new flagship music video to be a piece of anti-government agitprop. Suffice to say, there’s much to be criticized about the bureaucracy and corruption that has put money before lives, allowing a string of avoidable disasters culminating in the MV Sewol ferry incident that cost 296 lives. f(x) uses agitprop imagery – gasmasks, burning books, a 1984 movie theater, programmable audiences – and even updates their fashion to include symbols of rebellion.   -Vanessa Tottle

Seedy, steamy, and very alone. I ask you who’s sadder? Women who have sex for a living or a man who has sex to cope with living? He’s stuck in his drink. He’s so sad about himself he can’t interact with the women he’s with. The women are glamorous. Their tattoos speak to individual identities. He’s in designer threads, designer drink, designer bar. What’s his identity? He returns to a silhouette that goes in and out of focus. If he doesn’t want to join in, the women enjoy themselves as if he isn’t there. He can sing into his drink. The spoils of victory – everything you ever wanted and nothing to want anymore. Welcome to Hollywood.   -S.L. Fevre

Watch this site for the rest of our countdown.