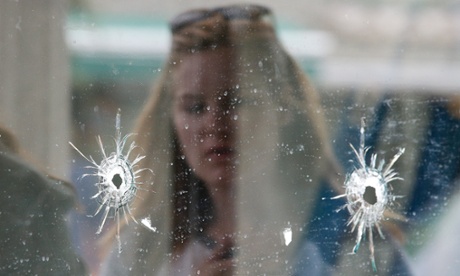 Ask me about dance or film or anything else, and I can go on for hours right now. Especially right now. Ask me about Isla Vista and…I’ve written pages of reaction and vetted them with a close friend, and they’re just not there yet. I will tell you a quick story about the Pick-Up Artist and Male Rights culture, however.

I lost an old friend in February last year to the Pick Up Artist culture. Let’s call him Bob, though that’s not his real name. I had visited Bob in New Jersey for a weekend, but one untested restaurant later and I was slammed with the worst case of food poisoning I’ve ever had. He was very helpful, even going with me to the hospital, but when he had to step out and I needed to ask his roommate for help, it became an issue. Let’s call her Alicia, though that’s not her real name either. You see, to put it in his words, Alicia was his. She had already informed him once that she was very much her own and no one else’s, but this didn’t stop him from exercising some territorial mark to everyone behind her back. As he described to me, one day she’d realize she owed him for his being such a good friend, and everything else would work itself out.

Bob had been spouting Pick Up Artist gibberish for years: “Have you heard about negging?” “What about getting a friend to talk you up?” “Do you have a backstory ready?”

For years, I had joined other friends in laughing off Bob’s PUA obsession as something harmless. We’d argue with him from a philosophical standpoint, but we’d invariably let it go as not something important enough to truly fight over. That was our mistake, because by the time that thinking had festered in him for years, by the time he found himself with his life truly backed up against the wall, women had turned into nothing more for him than a goal his suffering earned. Alicia was to be Bob’s reward for having a tough run of life, and he spouted off the PUA gibberish as if it were religious dogma.

I asked Alicia if she would still be around to let me back in after I hobbled down the street to get a prescription filled for my nausea. It was the end of a friendship. Now, I feared getting locked out for the day in a bad section of New Jersey while I could barely stand upright, but in Bob’s mind, other men in the apartment weren’t allowed to be alone with Alicia, because all men must think like he did. Suddenly, I became privy to the same kind of gender inequality we usually only attach to the most extreme religious fundamentalism. It didn’t matter that I was seeing someone. It didn’t matter that Bob and I had been friends for years. It didn’t matter that I must’ve looked real supersexy puking my guts out Exorcist-style. It certainly didn’t matter that Alicia was a person capable of her own free will. Bob could only understand the world through a reward-system of sex and male dominance. In his mind, every decision in his life had to be oriented around the acquisition and defense of sex.

I ended up driving home on massive medication, and not having eaten in two days, because it was too disturbing to stay in New Jersey. When I got home, there were e-mails from him. There were texts from him. I started getting calls at 2 a.m. just to inform me Alicia was his. I scuttled the friendship. Bob had, over several years, adopted himself into a cult. And make no mistake – PUA and the Male Rights Association are cults, developed with the same purpose in mind as any other cult – to indoctrinate and addict paying believers. Like many cults, they need an enemy who’s visually different from their membership – in this case, women. Like many cults, teachings become more and more aggressive to the point of violence and hatred – the one who offers the best opportunity to blame and hate the enemy makes the most money.

I talked with Alicia some weeks later. She was fine. She had found a way to largely extract herself from the situation. I haven’t talked to Bob since, and I’m thankful for that.

MRAs around the country are cults, pure and simple. They don’t always take the look of cults because they’re compound isn’t brick and mortar, but rather an online, anonymous one. They have extensive online outreach, messaging campaigns, newsletters, forums, advice columns, all driven toward the purpose of indoctrination. Some of the more complex ones have oriented themselves around hacking women’s phones and computers. There’s a cottage industry of revenge porn, often involving photoshopping the ex-girlfriends of members onto the bodies of nude models, and then forwarding the resulting fake to the ex-girlfriend’s employers, friends, and relatives in an effort to make her ostracized and get her fired. Other members may volunteer their time to stalk the ex. If they can’t have her, she doesn’t deserve to have a life – that’s what many of these men feel. That’s what the idiot in Isla Vista felt. These cults have members who form the same kind of cause-driven militias that other cults have, and though these associations may be socially networked, their guns are very real.

I also don’t want to relegate the issue to a couple of dangerous nuts. What makes so many men susceptible to PUA and MRA is a culture that values sex as a reward to be won in our films, our video games, our television, our books. We don’t just need better gender representation in our media, but a reassessment of the value systems that our media reinforces. We have a Star Wars film with one female lead to six male leads. How much do you want to bet she’s a love interest? We have 25 superhero films centered around a man for every one superhero film centered around a woman. That includes the most expensive cinematic franchise ever created, which boasts exactly one female superhero among eight males. That’s bullshit.

Look, I’m only qualified to talk about this from a media and art perspective, maybe something of a political one, though it’s been a few years since I was in that game. Every reader is going to be qualified to talk about this through their own specialties. Figure out what you have to say, make sure it’s something that adds to the conversation, and voice up. We may think our goal is to keep Isla Vista from happening again, but the truth is, Isla Vista happens in the form of assault and rape thousands of times every day because of the way men are raised to view themselves, sex, and their relationship to women in this country. The conservative estimate is that a sexual assault happens once every two minutes in the U.S., but this doesn’t take into account an estimate that 75 to 95% of assaults go unreported. That means that the real number may be as high as once every six seconds.

But I’m not an expert in this. There are people far better equipped than I to talk about what caused this and what might begin the process toward addressing it. Please read their words and consider what they have to say. I’ll post their articles below without the usual Wednesday Collective commentary because, frankly, what they have to say, they say far better than I can:

Let’s call the Isla Vista killings what they were: misogynist extremism
Laurie Penny

One thought on “Wednesday Collective — Talking About Isla Vista”