This weekend, Frozen will overtake Iron Man 3 as the fifth highest-grossing movie ever made. It will join Avatar, Titanic, The Avengers, and Harry Potter and the Deathly Hallows Part 2 in the top 5. Each of these films has something in common – though they may be outnumbered by the males, each has a strong female lead that doesn’t need the man in order to justify her role in the film: Zoe Saldana in Avatar, Kate Winslet in Titanic, Scarlett Johansson in The Avengers and Emma Watson in Harry Potter.

Frozen is the first in which the female protagonists outnumber the male. If you look at the top 20 films, or top 50, or whatever number you’d like, you’ll see a high rate of movies that boast female leads – Keira Knightley in the Pirates of the Caribbean movies, Laura Dern in Jurassic Park, Natalie Portman in The Phantom Menace (it’s worth noting this is the highest grossing Star Wars prequel, and the only one in which Portman has narrative function instead of being treated like a fetish object or a McGuffin). For all its other problems, Tim Burton’s Alice in Wonderland contains no male leads, instead bouncing back and forth between Mia Wasikowska and Helena Bonham Carter (Depp is supporting in this). It’s #16. The highest-grossing Dark Knight is the one that finally gives us a female superhero.

Even the highest grossing Indiana Jones was Raiders of the Lost Ark, the one in which the woman punched and kicked and drank and spit, not the one in which the women screamed helplessly or turned out to be traitorous. It took 27 years, the benefit of inflation, and Karen Allen reprising her Raiders role to finally set a new Indy box office record in Kingdom of the Crystal Skull.

We shouldn’t pretend this is anything new. Adjusted for inflation, the highest grossing movie of all-time is, by a very wide margin, Gone with the Wind (1939), which follows a female protagonist. The Sound of Music (1965) sits at #3. Female lead. Titanic (1997) and Doctor Zhivago (1965) are effectively split leads, one man, one woman. The Exorcist (1973) boasts two female leads and a male one that enters late in the game. Snow White (1937), female lead. Six of the movies in the top 10 boast a leading woman. Four of them follow a woman exclusively, with the men in supporting roles, while four films follow men exclusively (Star Wars, E.T., The Ten Commandments, & Jaws). This does not include the Judy Garland-led The Wizard of Oz, which was never much of a hit in theaters but has earned more in syndication (adjusted for inflation) than any other film.

If anything, I believe we were once better at creating blockbuster films that featured women in lead roles. From a purely box office perspective, it makes no sense whatsoever that women are so outnumbered when it comes to leading today’s big-budget movies.

Despite female-led movies being so heavily outnumbered by the male-led ones in 2013, these pictures held 3 of the top 6 box office spots: boasting the United States’ #1 overall earner The Hunger Games: Catching Fire, and the worldwide overall earner, Frozen, as well as Gravity. Women owned live-action comedy – The Heat, American Hustle, We’re the Millers, and Identity Thief all featured (and advertised heavily on their) female protagonists. You have to plumb all the way down to the year’s #5 live-action comedy to find one led exclusively by men: Grown Ups 2. The year’s biggest surprise, as it always is, was a horror film led mostly by women: in this case, The Conjuring, which made $318 million worldwide on a $20 million budget, featured Vera Farmiga, Lili Taylor, and Patrick Wilson. It became the highest grossing period horror film ever made, surpassing Shutter Island. 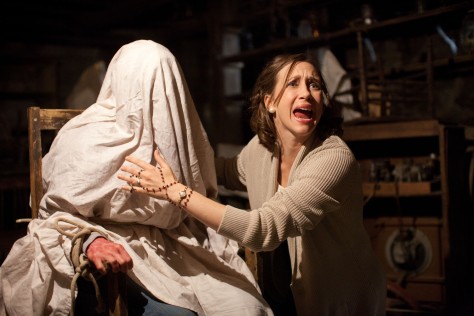 In fact, you have to go all the way back to 2008 to find a year in which the highest-grossing film in the U.S. lacked a female lead – The Dark Knight. Before that, you have to go back to 2005 and Revenge of the Sith. Only two years in 10 bucked the stat, yet the ratio of female leads to male in film doesn’t reflect that success.

Look, Chris Hemsworth can’t launch anything outside of Thor – he earned Ron Howard one of his least successful films (using the United States’ second most popular sport) with Rush while his Red Dawn remake tanked. He might be making good movies, but Matt Damon has launched more flops in the last five years than hits. Jeremy Renner’s failed as a lead to the extent he’s had the Bourne and Mission: Impossible keys both taken away from him. Outside of playing Wolverine, Hugh Jackman has as many flops (Australia, Deception, The Fountain) as hits. Tom Cruise (Oblivion), Will Smith (After Earth), and Keanu Reeves (47 Ronin) can no longer reliably launch genre films on their faces alone. And let’s not even mention the failed experiment that was Taylor Kitsch (who I quite liked in John Carter, and scratched my head at in Battleship). I may critically champion many of the actors and movies just mentioned, but from a business perspective, the big-budget market is simply oversaturated with male leads.

Stop cramming those roles down our throats in the decades-long, failed search to come up with a new Arnold Schwarzenegger. Give us the actresses who have already proven themselves at the box office – not just Jennifer Lawrence, whose forward progress you couldn’t stop with an army of bulldozers, a Great Wall, and Godzilla, but also Rose Byrne, Alice Braga, Rooney Mara, Zoe Saldana, Kristen Stewart, Scarlett Johansson, Dakota Fanning and our entire surging, underutilized generation of actresses. And if Mr. Universe Schwarzenegger can be turned into a star, then certainly former UFC fighter Gina Carano can.

It’s been pointed out to me that Hollywood is a business and, like any business, it’s going to ignore gender-bias and racism if it can make an extra dime by doing so. I would humbly ask in what country these folks have been observing business, but without getting into a political argument, the proof that Hollywood is catching up is just not there. Female-led films might be more prominent because we’re going to see them more and more, but in large part they are not greater in number – certainly not in event movies.

Let’s simplify the process wholesale and say your mega-budget film features a half-dozen representatives making decisions – two executive producers, your company’s financier, a co-financier from the company you’re splitting the budget with, the director, and a major star. One of your execs doesn’t like the idea of a minority woman in a lead. That’s out because you don’t want to get in a territorial battle you could lose. One of your execs thinks Kristen Stewart has too much baggage – she’s out. Your co-financier feels uncomfortable with an entirely white cast, and you can’t risk losing half the budget. The director really wants to work with Alice Braga, who he’s worked with before, and who is Latina. Losing him would mean finding a replacement director and possibly losing other stars. Your major star wants his role to be expanded. How do you solve this? Cast Alice Braga but demand the role is reduced, through a rewrite, shooting adjustments, or editing, into a supporting character. Give her less agency in the film in order to make everyone happy and keep them all on-board. Is it likely that all these things happen? No. Is it likely that – among multimillion dollar projects that have far more than half-a-dozen decision-makers who can each enforce having their way – that enough of these “concerns” are raised to result in your film featuring “safer,” more standardized characters and plotlines? Abso-fricking-lutely.

Big-budget Hollywood films have an incredible ability to take advantage of these standardizations when it comes to messaging, but they also drag their feet when it comes to changing the surface presentation through which their stories are told. As Geena Davis’s Katherine Huling so coldly makes clear to Lake Bell’s Carol in In a World…, that surface presentation very often supercedes a movie’s messaging, no matter how well-intentioned and intelligent it may be. What’s standard and safe in Hollywood’s presentation needs to change, and that requires voices to keep on insisting that it does.