Out of the Furnace, about a young war veteran in over his head and the sensible brother out to exact vengeance on backwoods gangsters, is a tone poem advertised as a revenge flick, full of reality so gritty that it stops feeling real.

The story’s a slow-build, introducing us to Russell Baze (Christian Bale) and his younger brother Rodney (Casey Affleck). Russell works in a Pennsylvania steel mill, has a loving girlfriend, and takes care of his sickly father. Rodney is in the army, headed for his fourth tour abroad, and owes some serious gambling debts.

On his way back from repaying part of his brother’s debt, Russell crashes his car, killing a woman and her son. Since he had a drink in his system, he’s shipped off to prison. While incarcerated, Rodney goes off to war, their father dies, and Russell’s girlfriend Lena (Zoe Saldana) leaves him. By the time he’s released, Russell has nothing left but an angry, aimless Rodney and his job for a steel mill that’s months from closing.

In a plot that sounds suspiciously like a Bruce Springsteen song, Russell plays by the rules, keeps his head down, and works hard the way his father taught him. Bale’s evocative, deceptively soft-spoken performance makes the first hour of Out of the Furnace sing. In Russell, he creates a character simultaneously unbreakable and broken beyond repair. His scenes opposite Saldana feel unforgettably real.

Unfortunately, Out of the Furnace has a second half, and its boilerplate vengeance plot doesn’t do justice to the film’s emotionally riveting introduction. Rodney, out of work and with few options left, is involved in bare-knuckle boxing and the petty politics of the gangsters who run the circuit: Willem Dafoe is excellent as a semi-father figure to Rodney and Woody Harrelson’s teeth-gnashing, all-consuming Harlan DeGroat is a sadistic villain who feels like he stepped out of a livelier, more aggressive film.

They’re brilliant. Harrelson is in a gangster movie. He’s brilliant. But when these actors cross paths, their scenes together feel like awkward pastiches, the superficial elements of each genre mixed into something awkward and inauthentic. The only tonal consistency is grittiness, so the story begins to feel precious and exist in a vacuum, without context. I haven’t even mentioned Forest Whitaker’s role as Police Chief Wesley Barnes, who takes the case when Rodney goes missing but is dating Russell’s ex, Lena. He’s in a soap opera. 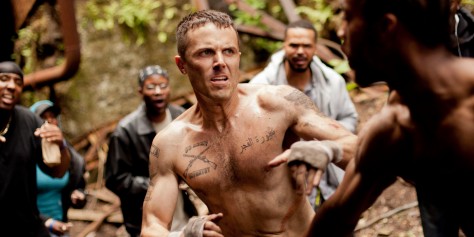 The result is a muddled mess that doesn’t know what it wants to be. This extends to the number of themes Out of the Furnace throws at you: life as a worker is like life in prison, our care for veterans is in shambles, our industry is moving to China, the legal system is wrapped up in bureaucracy, our working class is as defenseless as the deer Russell has lined up in his rifle’s sights. Good ideas each, but Out of the Furnace presents them with a heavy-hand and lacks the creative pathos to know what it wants to say about them. It brings ideas up as scenery, not as topics.

Out of the Furnace is a dour, ice blue-and-steel gray playground for superb actors, particularly Bale. That holds your attention for a while, but without anywhere else to go, Cooper falls back on a glumly delivered, formulaic, and deeply anticlimactic revenge plot. It’s rated R for violence, language, and drug content.

If you’re looking for a satisfying film that has a grasp of the messages it’s trying to communicate, you can do better, particularly in the 70s films Out of the Furnace seems to idolize – The Deer Hunter and The Godfather. For the film it most wants to be in grit and fatalism, I’d recommend Liam Neeson’s devastating performance in The Grey. If you’re looking for the rescue/revenge thriller Out of the Furnace advertises itself as, Homefront and Oldboy are still in theaters. For renters, Death Sentence, Django Unchained, and Man on Fire all combine social commentary with good acting and unhealthy doses of vengeance.

A version of this review appears in the 12/12/13 edition of La Vernia News.