I’ve never been so thankful for people who talk in the theater. There was an elderly couple a few rows back. The husband couldn’t tell everything that was happening on-screen. Occasionally, I overheard his wife describing the details that he missed.

12 Years a Slave is based on the memoir of Solomon Northup (Chiwetel Ejiofor), an African-American born free and living in 1841 with his wife and two children in Saratoga, New York. He makes his living in construction and by playing the violin. Like many free black men of that time, he is tricked into traveling south to Washington, D.C., kidnapped, and sold into slavery.

After Northup is traded to a new slaveowner, I overheard the husband a few rows back ask his wife, “Is he a bad guy?” She answered, “I don’t know yet.” Is a slaveowner a bad guy? Doesn’t it come with the title? The question ought to seem ridiculous, but the truth of the matter is that otherwise good men owned slaves. To pretend all slaveowners were snarling villains is a security blanket. It lends us the illusion that we’ve achieved some enlightenment that prevents us from engaging in future atrocities. That illusion is not just what the South took as license to engage in slavery, but what they used to justify it as a moral imperative.

Northup’s first owner, Ford (Benedict Cumberbatch), is a generous man who trusts Northup and puts him in charge of engineering projects and his own team of builders. As Northup said of Ford in his memoir, “There never was a more kind, noble, candid, Christian man than William Ford,” and he excuses Ford as blind to the wrongness of slavery because of the man’s situation. For such a description of a man who owned him, I’d suggest that Northup was the more kind, noble, candid, and Christian.

Born and raised as we are, were we transported into the role of slaver in Northup’s South, would we stand up for what’s right? I hope so. Born and raised in that time and that culture to believe from birth that slavery was God’s will and the way of the world, would we see it as wrong? If evil exists, it’s when good people are trained to act in ways counter to their nature.

Director Steve McQueen understands this. In 12 Years a Slave, the horrible things that happen are as routine to many characters as lunch. While the film is brutal, it doesn’t take the easy route and attack viewers with its violence. To the contrary, 12 Years a Slave is often gentle and soft and lyrical. Scenes come as moments in time and are presented with little self-consciousness. What happens is powerful enough to make its own statement, and McQueen understands his job isn’t to stylize it. His accomplishment is one of directorial restraint. 12 Years a Slave never makes you erupt in tears, though it easily could. It takes its time and bleeds them from you, breaking you down scene by scene. An emotional eruption would be relief, and this film has no interest in releasing you or your conscience. 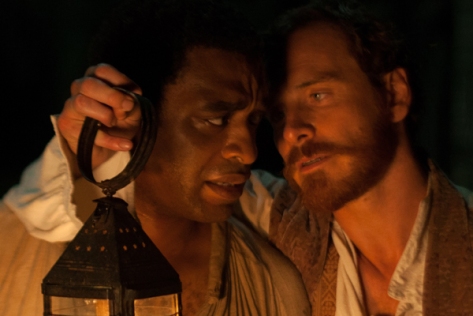 McQueen has deft command over one of the best young ensembles ever assembled. Northup is transported from Washington, D.C. alongside Eliza (Adepero Oduye), who has similarly been tricked into her situation. Her children are sold separately from her, and the seller, Freeman (Paul Giamatti) goes into some detail on the incredibe value of Eliza’s very young daughter.

Northup’s second owners are Edwin and Mrs. Epps (Michael Fassbender and Sarah Paulson). They are among the most terrifying married couples in cinematic history. Think of the most dysfunctional, drunken, manically unpredictable couple you know of and imagine their guilt, head games, and violence played out through people who they own. Edwin Epps is the kind of man who has you measuring every word you say on fear of death. His forced mistress is Patsey (Lupita Nyong’o), who at one point begs Northup to end her life out of kindness. Nyong’o is center to a scene that will burn into memory and must’ve been impossible to film.

Ejiofor himself has often played villains in supporting roles, and so I was apprehensive about his ability to play the lead in such a demanding story. His performance as Northup burrows its way into your conscience, however. It’s the best of the year, for what that matters, and in a year when Tom Hanks knocks out his best performance in 20 years, that’s saying something. Paul Dano, an expert at playing the most terrifying cowards, Brad Pitt, and Alfre Woodard join in understated supporting roles. Every good thing that can be said about the film must also be said of its ensemble and McQueen’s ability to draw career-best performances from so many.

I remember when Schindler’s List came out in 1993, my sister’s high school canceled classes and took the entire student body to see the Holocaust film. Many other high schools did the same. While 12 Years a Slave doesn’t have the marketing advantage of a Steven Spielberg, it is the most necessary film in the 20 years since. High schools should be taking a day to see and discuss it. It is rated R for violence, cruelty, nudity, and brief sexuality, but I don’t believe you can make an honest film about slavery without those things. 12 Years a Slave isn’t just important, it’s crucial viewing for any American.

Truth be told, I wasn’t just thankful for that elderly couple in the back of the theater because they gave me a lead into this review. I was also thankful because they gave me an anchor back to kindness. When all was said and done, I could look to them leaving the theater hand-in-hand and regain some faith that retaining our kindness, patience, and generosity will lead the world to a better place. Perhaps that’s my security blanket, my illusion. Some would say we’re doomed to repeat atrocities like slavery and the Holocaust ad nauseum. Others would say we can one day make them a trait of the past.

12 Years a Slave is the impossible film that makes me believe both sides all the more.